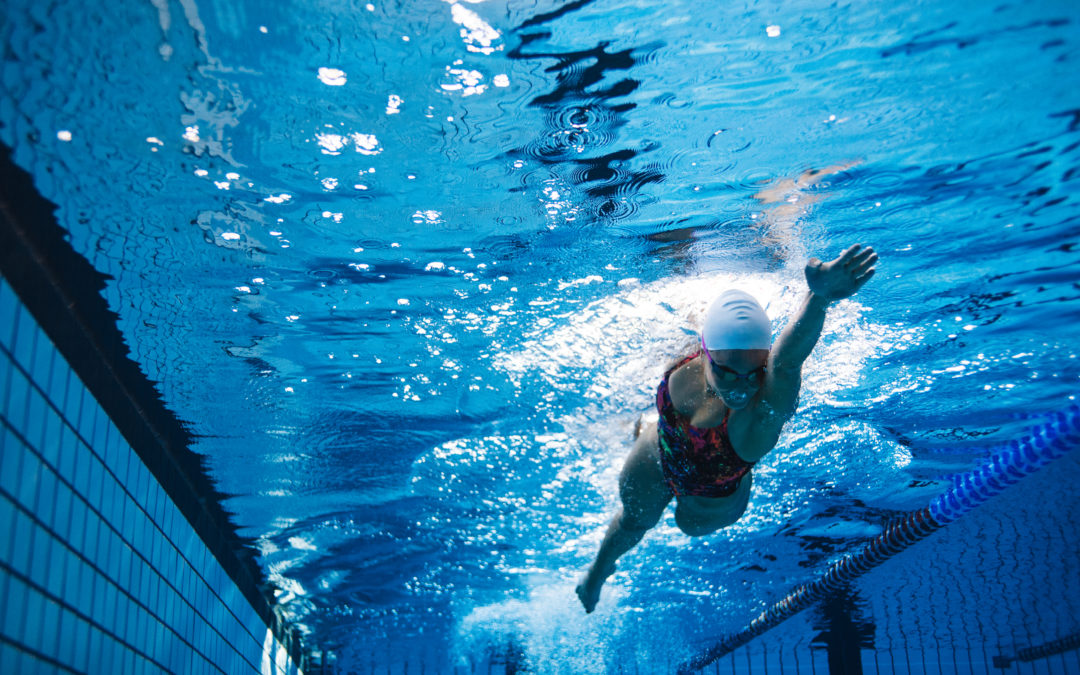 Photo:  The “Skate Position” in Freestyle

Well yes.  First, we teach the four (4) competitive strokes that are called out directly in the Meet Event line-up:

You will also see current Seton backstroker Lucy Garvey gain a huge advantage with her Underwater Body Dolphin leading off our girl’s 200 Medley Relay in this season’s meet.

Here’s another view of the best underwater swimmer in the world, Coach Ross Palazzo’s former teammate, Caeleb Dressel.  In this video, Alabama swimmer Derek Maas (OK, he’s from Alabama, but he’s still a good swimmer ;-)) explains why Caeleb Dressel’s underwaters are so good:

The way I get up to a count of six (6) is that we differentiate between “Efficient Freestyle” and “Effective Freestyle”.

Because freestyle is used in eight (8) of the eleven (11) swimming events, we spend the most time on that stroke – always starting with building an “Efficient” freestyle first.

An “efficient” freestyle rests on a foundation of the most basic position in swimming, what Terry Laughlin labeled the “Skate Position”.  See the picture, above.

Good swimmers find this position on every freestyle stroke.  It ensures you are streamlined in the water with the minimum possible resistance.  Your arm reaches to full extension toward the end of the pool, you have one shoulder completely out of the water pointing directly toward the ceiling, and your head is down with your cheek against your shoulder.

What makes the stroke “efficient” is that you remain in this position for as long as possible – even as you begin the stroke with your other arm.

You might hear your coaches refer to “catch-up” freestyle.  That means that you should remain in the skate position with one arm fully extended until the other arm completes its stroke cycle and “catches up” to your lead arm.  In other words, both arms are out in front of your body.

Now that is a little extreme, so I often tell you all to do “Cheatin’ Catch-up” which means you can cheat a little on your catch-up freestyle – you can start pulling down a little before your stroking arm actually “catches up”.

The reason that swimming in this fashion is so efficient is because it features a glide on your side with each stroke.  The reason it is called the “Skate Position” is because swimming an efficient freestyle is much like ice skating.

“Efficient” freestyle is much like that.  You reach for Skate Position on one side and glide.  Then you quickly switch to your other side, find Skate Position, and glide on that side.

If you swim like I’m describing here, and don’t hold your breath underwater (you should be exhaling underwater continuously), then you can swim much farther and much faster with far fewer strokes per length of the pool.  As you have heard me say many times, “gliding is much easier than swimming”.

The longer the race, the more important an efficient technique becomes.  The next time you watch swimming on TV, particularly events longer than 400 meters, you will clearly see what I am talking about.

This is a 1500-meter event, so you do not need to watch the whole thing.  Just fast forward to anywhere in the middle of the race and you will clearly see what I mean.  I would recommend that you at least watch between 12:59 and 13:10 where the commentator discusses Sun Yang’s underwater pull also.  Has anyone ever heard me say “high elbows!”

As the races get shorter and the need for speed increases, good Freestylers gradually transition from “Efficient Freestyle” to “Effective Freestyle”.

The difference is how much you “cheat” on your catch-up – the more speed you need, the more you cheat.  Which means that you are likely to “cheat” more in shorter races and at the end of longer races.

There is one big problem with “cheating” on your catch-up more though.  It is very tiring.  The more you cheat and the less glide you get, the more work you are doing – but oddly enough, the more short-distance speed you can generate.

That is because it is more “effective” to have one arm pulling against the water for a greater percentage of each stroke.

The answer is “yes”.  But once again the problem is that you lose all of your efficiency.  It is extremely tiring to swim this way – but it is definitely more “effective”.

There are five (5) other differences between an “efficient” and an “effective” freestyle, the recovery, turnover rate, the kick, breathing, and explosiveness.

The freestyle “recovery” refers to what you do with you arms above the water when you are bringing them forward from the end of an underwater pull to the beginning of the next underwater pull.  In a “efficient” freestyle, we bend our elbow and slice our hand into the water to push it through any bubbles that are created.  We do this so that our hand can find clean water for the strongest possible pull.  For an “effective” freestyle, there is no time for that.

The “turnover rate” simply refers to how fast you are moving your arms.  Think RPMs or Rotations per Minute.  It is extremely tiring, but it is also obvious that a fast turnover helps lead to a fast freestyle – as long as you are not sacrificing a good underwater pull in the process.

The third difference is in the “kick”.   I think it goes without saying that a big kick makes a big difference for generating speed.  It’s like swimming with an Evinrude Outboard Motor attached to the back of your body.

In the most “efficient” freestyle, you might typically do a 2-beat kick, meaning you kick twice per stroke.  In an “effective” freestyle”, you will be doing and 6-beat kick, and you will be kicking very hard.  Nothing in swimming gets your pulse up like a big kick because your thighs are the biggest muscles in your body.  This is yet another reason why an “effective” freestyle is only good for short distances.

The fourth difference is in your “breathing” – in this case, I am referring to how often you breath.  Any time you take a breath, you are getting out of that very efficient “Skate Position”, so it should be fairly obvious that, if you want to have the most “effective” freestyle, you have to breath as little as possible.

You may have heard me tell you, “Quit breathing so much!  You can breathe 3rd period!”  Obviously, that is a bit of hyperbole, but as an example, our top swimmers in 50 Free should be breathing no more than once down and twice back – and never, never, never inside the flags, no matter how long the race has been.

And the final difference is in the “explosiveness” of the pull, particularly at the very end.  In an “effective” freestyle, the end of your underwater pull, where you are in the best position to exert the maximum power on the water, you accelerate the speed of your hand and flip your wrist in a the most explosive manner possible.

So, let me show you a few examples of when an “effective” freestyle is applicable:

Here is Caeleb Dressel swimming 50 Freestyle in the 2018 NCAA Championship Finals.  He is in the red suit in lane 4, but that will become obvious in the first few seconds of the race.  When you watch this, remember that the other guys in the race are among the fastest swimmers in the world.  (I just watched this again as I was updating this post – I’ve seen it 50 times and it is still unbelievable!)

That, of course, is a great question.  All I can say is that it is the difference between the top swimmers and rest of us.

First, let’s go back to Sun Yang’s 1500-meter freestyle.  Fast forward to 19:00 to watch the last 100 meters.  At 19:40 you will clearly see that his stroke has changed – he is cheating almost 90-degrees as he begins his sprint to the finish, and at the very end, his arms straighten out even more as he reaches for the finish:

As a second example, let’s take a look at America’s premier sprinter for so many years, Nathan Adrian.  This is his 100 Freestyle from the 2012 Olympic Games.  He’s in lane 5.

During most of the race, you can see that he maintains a short glide in each stroke.  Yes, he’s “cheating” quite a bit as you would expect for only a 100 meter race, but he still finds Skate Position and takes advantage of it on each stroke.

Then at the 4:00 mark in the video, about 15-20 meters from the finish., you can see a very clear switch in his stroke.  His arms straighten out, and he starts swimming with his arms 180-degrees apart.

As you will see, that switch makes all the difference for the Gold medal:

When I was teaching the Group 1 and 2 swimmers “effective” freestyle earlier this past week, Céilí Koehr asked me an excellent question: “When you are swimming Effective Freestyle, and your arms are straight during the recovery, should they be straight under the water too?”

No!  Your basic underwater pull is the same.  You still want to:

I hope you have seen now that there are really two different Freestyle strokes, and they apply differently to different competitive situations.

“Efficient Freestyle” is the important basis for both, but you can switch to an ever-increasingly “Effective Freestyle” depending on the length of the race or where you are in the race (i.e. how far from the end of the race).

I have seen this make a huge difference for some of our top Seton Swimmers, particularly our older boy’s three season’s ago.  I think it can make a big difference for our top girl’s this season also.

We shall see starting at with December’s meets!