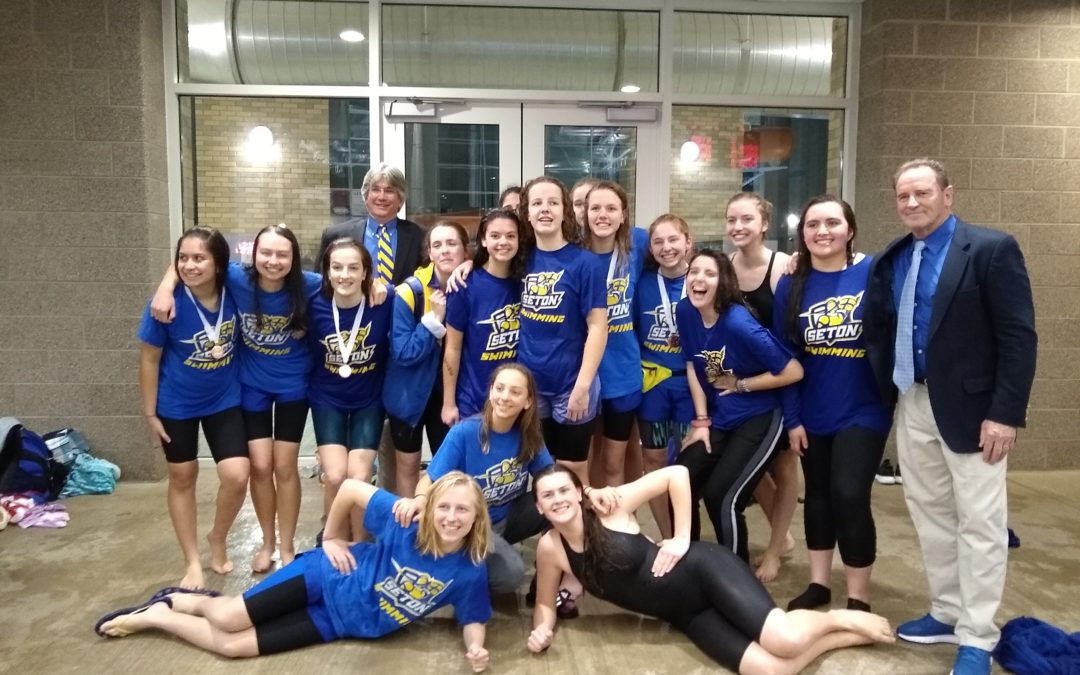 I remember when I was a kid, long before cable TV, Hulu, and ESPN, there was a very popular show on Saturday’s called “ABCs Wide World of Sports.”  I’ll never forget, in the opening of each episode, watching a Yugoslavian ski jumper named Vinko Bogataj fall off the end of a huge ski jump to the sounds of Jim McKay saying “The thrill of victory…..and the agony of defeat.”  Here is the version of the show intro from 1978, when I was a freshman in high school.

Our Seton swim team got a chance to experience a little of both over the past two weeks, including Saturday night when we traveled out to the beautiful Fitch WARF in Warrenton, VA for the annual Delaney Athletic Conference Championship meet.

And congratulations to our Swimmers of the Meet:

Once again, it was a very fast meet with five (5) new DAC Championship Meet Records:

Some of the records that were broken were previously set by some of the fastest kids in the history of the DAC.  For instance, the Boys 200 IM record set by Andrew Turbyfill was previously held Seton great Nevin Cook who set the record as a sophomore back in 2006.  Nevin went on to be the State record holder and All-America in that event as a senior with a 1:54.70.

And finally, the Trinity Christian superstar duo of Brooke Williams (SR) and Annalise Cornett (JR) lowered records they already held in the 50 Free and 500 Free.  As you can see from those performances, either Brooke or Annalise could have justifiably been the Swimmer of the Meet.

Finishers in the top 3 in an individual event at DAC Champs are designated “All-Conference.”  Congratulations to the following eight (8) Seton Swimmers who earned that honor (more details below):

The meet was hosted by Highland School and Wakefield, and they certainly ran one of the best Conference Championship meets that I have been a part of – and I’ve been a part of DAC Swimming since 2001.   Congratulations to Highland Coach Ross Malinow and Wakefield Swim-Dad Dean Burdette for doing such an outstanding job!

It turned out to be a great team effort with Seton for many aspects of the meet.  With the great parent volunteers that we have at Seton, the Highland/Wakefield/Seton team was unbeatable in the meet-running department.  I was so pleased to watch Bill Dealey, Hank Konstanty, Anne O’Malley, Jim Griffin, John Kleb, Therese Griffin, Charles Seltman, Mitch Albin, and David Wilson step up to help run most of the competitive aspects of the meet.

Here’s how the final scores looked on Saturday.

On the boy’s side, we are very deep.  With that depth, we won the meet handily even though:

Our boys had numerous events where we had three (3) and even four (4) swimmers all score in the top 12.   An example was the Boys 100 Backstroke where high-school-only swimmers Shane Koehr (SR), Evan Wilson (JR), Jeremy Kleb (SR) and Justin Fioramonti (SR) took 2nd, 3rd, 7th and 8th.  There are a total of 93 points available in an individual event, and we earned 40% of them in that event.   That’s impossible to beat, even if your team has a superstar USA swimmer or two.

On the girl’s side, the story turned out a bit different this week.

In fact, if you look back at the results from 2010, you’ll see that we had reached our peak in DAC competition for both the boys and girls:

Here’s a chart for Fred Cornett (Mrs. Cornett says you like the numbers) that compares Seton’s score at the DAC Championship meet since 2003 with the next best DAC team.  There are two (2) striking things about these charts:

What happened in 2016?  Answer: Trinity Christian School joined the DAC.

After doubling or nearly doubling the 2nd place team’s score for the previous seven (7) years, in 2016, our girls found themselves in their closest Conference Championship meet ever. Then, in 2017, the unthinkable happened – we lost.  That’s when we first met a group of young female swimmers that would cause Seton trouble all the way up to the present day:  Brooke Williams, Annalise Cornett, Becca Klanderman, Haley Silvernail, Laurel Schmidt, Morgan DiPippa, Eva Dahlberg, Kayla Shelkey, Jenna Phillips, Teresa Klanderman, Caroline Sykes, Anna Deatherage, Lucy Sicks and others.

The meet has been close ever since, particularly in 2018 when Seton won by only 0.5 points on nearly 600 total points scored.  Last year, Seton prevailed again, but only by 16 points.  But this year, The Trinity girls pulled away, winning 312 to 273.

How the Girl’s Conference Meet was Won

From the start of the week leading up to Saturday’s meet, I could see it was going to be tough for us – out top swimmer, Mairead Geiran, announced that she was transferring to Saint John Paul the Great that Monday.  Despite that however, I remained confident we could pull it off.  My confidence was validated when I scored the Psych Sheet and calculated a score within five (5) points of Trinity Christian.

Then the phone calls and e-mails started coming.  Mary Pennefather has the flu.  So does Caroline Griffin, Isabelle Luevano, Ceili Koehr, Theresa Dwane and others.  Several of the boys were hit too.

I was beginning to lose some faith in my prediction on Saturday morning when I heard from Mrs. Luevano that neither Isabelle nor Nathan would even be able to attend the meet at all.  Then I got this great message from The Chief (aka Mrs. Carroll): “Perseverance in the face of adversity is an important virtue.  It is subset of both excellence and sacrifice. [i.e. two of our GEMS]”

We certainly had some swimmers demonstrate that perseverance:

Those three and several others showed a lot of heart, but it just wasn’t meant to be.

In retrospect, even if we were completely healthy, I don’t think it would have made the difference for us – the Trinity Christian girls were fantastic!  I’ve always said that if you swim Personal Records, the winning takes care of itself.

Through the first few events, that seemed to be the Trinity Christian mantra.  Bella Yaraschak, Caroline Sykes, Lucy Sicks, Teresa Klanderman, Anna Deatherage, and Amy Phillips all had personal bests in the first three individual events.

I was holding on to a thread of hope going into the 100 Fly.  We were lined up to be very strong in that event – and our girls delivered.  Emily Flynn took Bronze with a .42 second PR.  Caroline Griffin took 4th swimming right on her PR in spite of her cough.  Maggie Gibbons and Sophia Zadnik took 7th and 8th, both with PRs of 2.36 and 3.44 seconds, respectively.

Then, in the very next girl’s event, Jenna Phillips (JR) had the swim of her life, beating her previous best time by .77 second to take the Gold medal in the last 15 yards of the race.

The nail in our coffin was the Girls 200 Free Relay which uncharacteristically featured Brooke Williams and Annalise Cornett.  It was just more than we could handle.

Seton’s strength has always been our depth.  We have a simple and repeatable formula that has resulted in the sustained excellence for our program:

That formula has provided unmatched depth for Seton, which is at huge advantage in any dual meet as a result.  That’s why we’ve had so much regular season success over the past two decades.  But in a championship meet format, the advantage shifts towards the team with swimmers who can finish near the top to claim the big points that come with those top finishes.   The faster the meet, the more your top swimmers matter.

I am very excited about the group of swimmers we have that are sophomores and below, particularly the large crop of swimmers that are currently in middle school.  They are excited to be on the team and they are getting faster, in many cases dramatically so.  In a few years, unless another DAC team either copies the success formula I freely offer or inherits a group of USA swimmers, I predict that we will be unbeatable at the Conference level and beyond once again.

Trinity Christian has done us a huge favor by beating us.  In a concept that I refer to as “meekness”, they have competed in such a virtuous way that they have made us better.  We’re looking forward to returning the favor next year 😉

In the meantime, we’ll all be cheering for the Trinity Christian girls at States!

One unique form of recognition available to our swimmers at this meet was the possibility of being designated “All-Conference”.  All-Conference recognition goes to any swimmer that gets a gold, silver or bronze medal in an individual event.

One thing that you will notice is that Seton did not win a single individual Gold medal in the entire meet, yet our girls took 2nd place and our Boys won handily.  That’s what happens when so many different swimmers can score, even our younger swimmers.   It is very cool to have two (2) Sophomores and two (2) Freshman on this list!

Shaking Up the State Championship Team

There were a number of consequential swims that changed the composition and line-up for the team we are bringing down to Christiansburg this weekend.  Here are some of them:

Other Great Swims for Seton

Out of 64 total scoring flat start swims, including “A” Relay lead-offs, Seton had 31 new Personal Records on Saturday.  I’ve spoken of many of those PRs already, but here were the rest, plus some other great swims, that I have not already mentioned:

Some Final Notes on States

I have posted a document called “Everything You Need to Know About States” in the hopes that it literally tells you that.  I’m continually updating it as plans firm up.  A lot of what you need to know is in the Meet Announcement also.

Once again, we have a Team House this year for team meals and as a hang-out between sessions.  I’ve enlisted the help of Mrs. Luevano and Mrs. Griffin to take charge of the team meals.  By now, you should have your lodging set up, and I should know about it.

A few other things I’d like to highlight that will be in the document:

I was standing on deck with Mr. Vander Woude contemplating all that was happening around us when a man, who turned out to be from Fredericksburg Christian, walked up to me and asked if he could talk to me.  My first thought was “Uh-oh,” but he quickly relieved my fears.

“I just wanted to tell you how great the kids on your team are.  I’ve been timing at the meets you host for several years, and I’m always amazed by how your kids always thank me.  Seton is a real class operation.”

The first value in our GEMS is Gratitude.  I was so proud to see you all living that value in your daily lives.

“Who’s got it better than us? Nobody!”

Now let’s go have some fun racing at States!