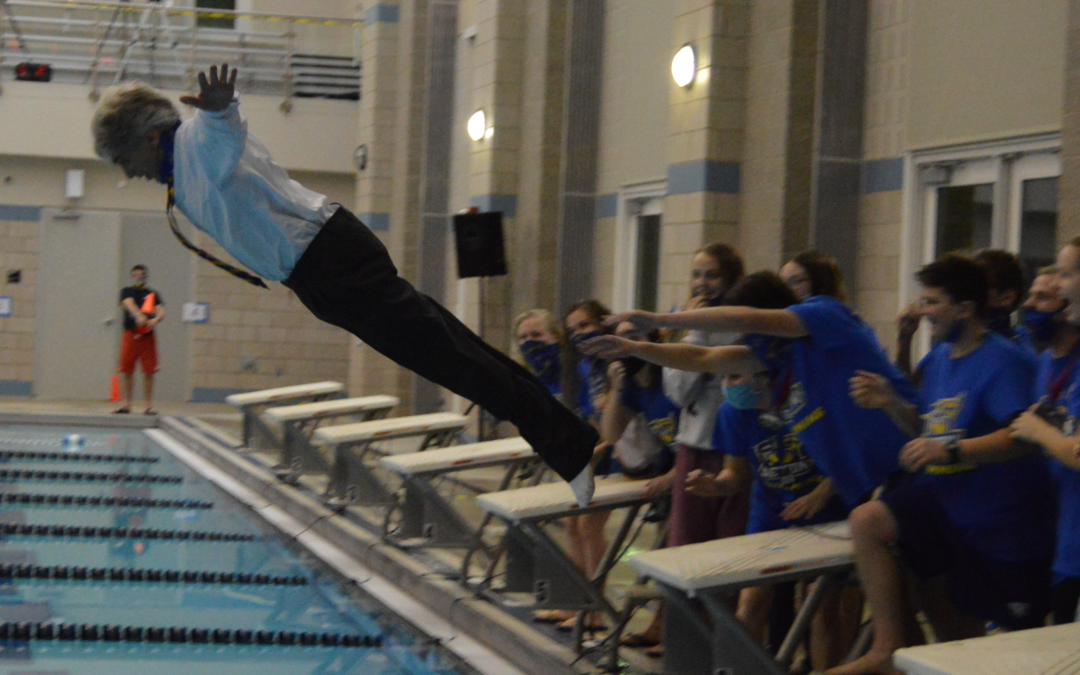 It was as if Apollo was determined to force us to make amends for a crime we did not commit.

By the time we got to last week, a premature rescheduling of DAC Champs started to feel like Hercules’ challenge to kill the Nemean Lion.  Then the ice storm on Saturday felt like being assigned the task of slaying the nine-headed Lernaean Hydra, and even overcoming a last-minute discussion among the VISAA Swimming leadership about not recognizing a State Champion at all this year felt like capturing the Cretan Bull.

OK, I know that is all a bit hyperbolic, but it just seemed like nothing was going to be made easy this year.

And that made Saturday’s DAC Conference Championship Meet even more satisfying – our 12 “heroic labors” were finally completed for the Mycenean King.

Countless people were involved in these daunting trials, led of course by Paul Fifield and Bill Dealey who bore the brunt of the load.   Thanks to these two plus so many others, I think we can honestly say that we have a done a great service to the physical, emotional, mental, and spiritual well-being of the nearly one-third of the kids at Seton who were on the swim team this year.

I must also express my gratitude to Tommy Cureton, the Warrenton Parks and Recreation Director, Denise Robey, the Aquatics Manager at the Fitch Warrenton Aquatics and Recreation Facility (WARF), and all their staff for being so helpful and accommodating.  A late-night, weekday meet was no one’s preference, but instead of defaulting to “no”, they generated an option for us to make this meet happen.  It is all part of the reason I love living in Warrenton.

Congratulations to both the Seton Boys and Girls who ended the night as Champions of the 2021 DAC Conference Championship Meet.

And congratulations to this year’s Swimmers of the Meet:

It was a very fast meet, particularly on the girl’s side where there were three (3) superstars vying for attention with their stellar swims.  The girl’s Swimmer of the Meet could have just as easily been Paris Thornburg of Highland or Annalise Cornett of Trinity Christian School, both of whom also won two individual Gold Medals and set new DAC Records with tremendous swims.

Here are three of those great swims that resulted in new DAC Championship Meet Records:

We also had some new Seton and Highland Team Records:

I hope you noted those times and the grade levels for these girls.  We are talking about very fast girls that are going to be around for a while!

A recording of the Meet live-stream is under the About/Videos menu or by clicking here.

Going into the meet, I knew that we had two challenges:

But after reviewing the Psych Sheet, I quickly saw that our Girls had one more significant challenge to try to outscore Trinity Christian.  Led by Annalise Cornett’s prowess in her two individual events and on the anchor of two relays, I knew we would have our hands full.  Scoring the Psych Sheet, it looked like the meet would be within only 35 points.

In the end, we completed our historic season with victories for both the Girls and the Boys:

This final victory capped the most prolific season we have had in nearly a decade:

All that is left is to try to win our 9th and 10th VISAA Division II State Championships.  The work in the water is done – very well done.  I will submit our “entries” by February 20th, and we should hear the results of the virtual Championship by February 28th.

That would be amazing way to end this historic season.  We will not be absolved of our guilt or achieve immortality, but a State Championship would be a great way to move on to other adventures.  Next year, I understand there is a Princess in Troy that needs to be rescued.

One of the unique features of the DAC Conference Championship Meet is the path it provides to recognition as “All-Conference”.  Anyone who finishes in the top-3 in an individual event is designated “All-Conference”.

We had a bunch:

Of course, we were trying to have our cake and eat it too by winning both, but that did not mean there were some hard decisions to be made.  Most of those were in the relays where I needed to use Jack Santschi (SR) and Joe Wilson (SO) in all three of them to help ensure we would have the best possible times to submit for States.

The calculus here was complicated by the fact that we only had two (2) teams with relays in the meet and only “A” Relays scored.  With first place scoring 32 points and 2nd place scoring 26 points, winning a relay was only worth 6 points in this meet.

But that will not be the case for States, so I went all-in on our line-up with States in mind.

The boys swam three (3) excellent relays, winning the DAC Championship in all of them and improving our State Meet chances in two of them:

We really needed that last relay, because Peninsula Catholic is looking like they could be our major competitor for the State Championship.  They have two studs who are going to score a lot of points individually.  Of course, if their coach ends up using the two of them in two (2) individual events, it frees up one of relays to score big against them.  Plus, we have four (4) divers.  It is going to be really interesting!

On girl’s the side, our competition is a lot better known and closer to home – Trinity Christian School.  (We are also going to have to contend with the Steward School that we saw in the VISAA Division II Invitational.)  Our girl’s relays swam incredibly well, but unfortunately for us in the competitive sense, so did Trinity:

At the beginning of the season, I got together with Paris and Madisyn and developed some goals.  So far, we are meeting or exceeding all of them.

Other Personal Records and Great Swims

You do not win a meet like this with just medalists.  Depth has always been the key to our victories, and Monday night’s DAC Championship was no different:

You have left me with some very good times with which to work for the virtual State Championship.  Now it is just going to be a game of chess with the pieces you have put on the board for me.

I am optimistic, particularly with the great work our Diving team has done this year, but looking at the latest VISAA time postings on SwimCloud, this is definitely not a slam dunk.

I hope to know the results before our Swim Team Banquet on Sunday, February 28th.  Coach Dalrymple is working on a location that will handle a team our size with plenty of space.  More on that soon.

In between all of that, Coach Dalrymple is also hosting a dinner for the Seton seniors at her house in Nokesville at 4:00 p.m. on February 20th.  Parents and Coaches with spouses have also been sent invitations.

At the dinner, I hope to continue our tradition, started a States a few years ago, of offering the opportunity for the seniors to say a few words about their time on the Seton Swimming.  It has been a very cool experience in the past.

Congratulations on a great season!  I wish more than anyone that we had more work to do in the water to win our 9th and 10th State Championships, but I guess the ball is left in my court rather than yours, where it rightfully should be.

You have all done your part, for sure.  You can count on me to give the level of effort in preparing our State Meet entries that you all deserve.