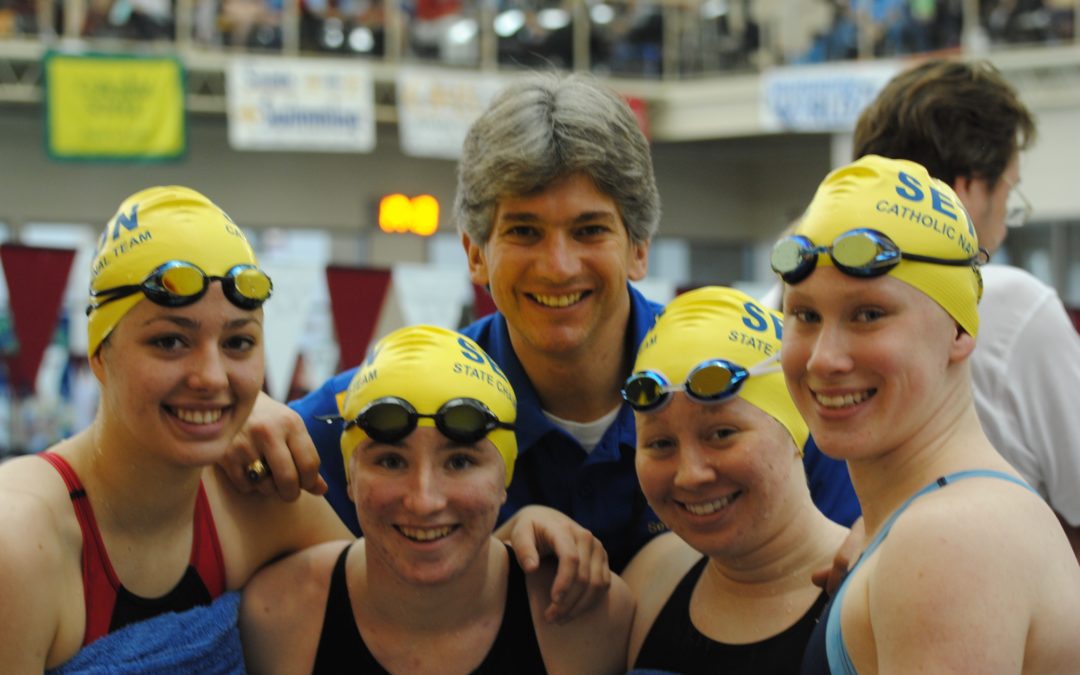 February 18th and 19th, 2011 was a great weekend for Seton Swimming at the VSIS Virginia State Swimming and Diving Championship in Christiansburg, VA:

And check out those scores versus Bishop Ireton and Paul VI?  This is the 3rd year in a row that both our boys and girls have defeated our diocesan school rivals.  Very cool!

Seton Swimming has received a great deal of media coverage for our State Championships, including live coverage by Swimming World Magazine who streamed the meet live on SwimmingWorld.TV.  The coverage included live color commentary, daily meet recaps, and interviews with many of the top swimmers.

You can see the complete archives of the coverage, including video on every heat of both prelims and finals, by clicking on:

And here are some links to coverage in our local papers.  All of the coverage has been very positive about Seton School, our team, and the progress our team has made over the last nine years:

In the above profile, the editor references Coach Koehr’s 10 Rules for Success so I’ve included a link and posted them under Team Information.

Our Girls 200 Relays Rocked – Even Surpassing a State Record!

Going into the meet, I knew that we could score a lot of points with our relays.  Relay events score double the points of an individual event.  A gold medal individual scores 20 and a gold medal relay scores 40.  With that in mind, I was very excited about our relay prospects, and I wasn’t disappointed, particularly by our girls relays that earned a silver and a bronze medal:

Junior Cat Rogers had quite a meet, leaving Christiansburg with:

Not a bad weekend’s work for sure.

Cat’s 100 Breaststroke was a phenomenon to behold, starting in prelims where she entered seeded 7th with a PR of 1:09.69 and exited seeded 1st for Finals with a new team record 1:08.31 and a new PR by an incredible 1.38 seconds.  It is rare that swimmers at Cat’s level drop so much time in a single meet.  Not only did that swim beat a record set by former State Champ Swimmer of the Meet, Katie Shipko way back in 1998, but it allowed her to pick the music that was played as the 8 championship finalist marched to the blocks that night.  Click here to see Cat’s 100 Breaststroke preliminary heat.

Before finals, Cat told me that she was worried about those “1:07s”, the girls right behind her who she knew were capable of going 1:07 in 100 Breaststroke.  We both knew that it would take 1:07 to win, but I also knew that Cat had it in her.

The final race was incredibly fast, with Cat actually taking the lead off the start with her incredible underwater pull-down.  At the 50, there were 4 girls nearly even with Cat’s split of 31.64 getting her to the turn in 3rd place.  Prior to this State meet, that 50 split would have been comparable to her best 50 breaststroke relay split (with a relay start!) so I knew she was headed for a very fast time.  Cat brought the race home very strong, holding on for the bronze medal with an incredible 1:07.94 – another new PR, another new team record, and an All-State qualification.  She had cut her PR by 1.75 seconds and broken 1:08 for the first time ever – truly amazing.

After the race, I reminded Cat how worried she was about those “1:07s”.  Now Cat is one of those swimmers that she was so afraid of.  Click here to see Cat’s 100 Breaststroke final.

Cat’s other individual event was the 50 Free, an event that wasn’t really a focus event for her prior to this season.  Now, I think it may eventually prove to be her best event.  In the prelims, Cat entered with a PR of 24.77.  After swimming a new team record 24.56, a .21 second PR, Cat was headed to the Finals seeded 3rd.

Recall that last year, Lauren Donohoe won gold in the 50 Free at 24.84 so this event had really heated up – so much so that the top seed in the event had to break the state record in prelims to earn the number 1 seed for finals.

The finals was the fastest heat of girls 50 Free I have ever seen in person in my life.  Cat dropped her PR and team record once more, down to 24.54, to take 4th place in a heat where it took another state record to win.  Click here to see Cat’s 50 Free final.  Lauren Donohoe was also in this heat.

I can hardly wait for next year’s State Championship final in the Girls 50 Free.  The top finisher was a senior, but the next two were Juniors like Cat and they all finished within .15 seconds of each other.  I’m betting on Cat.

Not to be outdone by the swimmers, our divers scored more points in an individual event than any of our swimmers!  The biggest reason for that was Freshman Joe Duran’s Silver medal combined with senior Joey Rubin’s 8th place and Michael Manley’s 12th place for a total of 33 points in a single event, Boys 1 meter Diving.  That 2nd place finish for Joe Duran also qualified him for All-State recognition!

If you look at the scores above, we defeated North Cross School for the State Championship by only 28 points – so it would be no exaggeration to say that our boys State Championship victory was won by Seton Swimming AND Diving.  Congratulations divers – and thank you!  I already asked Mr. Vander Woude to make sure that our championship banner this year says “Swim & Dive”.

Here are some notes on Diving from Coach Maureen Duran, including some highlights of the outstanding performance by the girl’s team also:

All you could possibly say about Seton’s Diving Team is that it just keeps getting stronger. Last year at 2010 States, we earned our swim team 5 points from Joseph Duran, placing 12th with a score of 207.5. Dive captain, Sarah Zapiain, last year placed 17th with a score of 131.65 and Mary Duran placed 19th with a score of 122.20.  Keziah Higginbottom, placed 20th with a score of 99.80. This year it was a different story at States with additional individual Seton divers who fought the good fight.

The competition was as tough as ever. Please imagine Seton divers, most who have very little experience and who only dive during Seton’s dive season are competing against diving teams who have paid, and may add exceptional dive coaches, who have their own pool and who have morning and evening practices. Oh did I mention over half of the divers dive all year around. So check this out. Joseph Duran moves from 12th to 2nd place this year scoring a whopping total dive score of 321.30, compared to last year’s 207.50. Joseph was only 8 points from the first place winner. Joey Rubin, remember him, he left us for a year and we are so glad he came back to Seton to finish his senior year, gave Seton big points by winning 8th place and medal around his neck too. Joey had a good score of 221.70, only 6 points away from taking 7th place. Michael Manley came in strong with 12th place. Michael fought hard and was 17 points away from 11th place. That’s only one strong dive away from moving up, Michael. You provided Seton Swim with valuable points too.

The girls diving competition was a bitter sweet experience for me as a coach. They made cuts this year unlike previous years. If the squad is relatively small to begin with you hope that everyone would get a chance to perform their dives considering how hard they worked to get to States. I’ll stop complaining because we have so much to be thankful for. Remember last year, Sarah Zapiain 17th at States, well she worked hard against exceptional women divers to provide Seton with points at 9th place, with a whopping score of  206.20, last year’s score was 131.65.  Sarah was ONLY 6 points away from the medal awarding score of 8th place. Mary Duran, went from 19th place last year to 14th place with a head turning score of 155.70. Mary was only 10 points away from 13th place. I think we’ll see Mary move up next year. Our very own Keziah Higginbottom, placed 20th with a score of 99.80, last year and had a score of 95.95 at states. Her score was still this high with one less dive factored in. Keziah is only a 10th grader so we have two more years to show the world what she’s made of. I know her potential I just want everyone else to see it too. My favorite and hear felt acknowledgment goes to Kristie Ostrich. Many of you don’t realize but this senior soccer superstar decided to put her big girl pants on and learn the eleven dives necessary to compete at States. With only one week before the event, Kristie learned the “scariest dives ever,” not my words, and was able to compete with the big dogs. Although she didn’t make State cuts, in my heart she made the cut of bravery, courage and tenacity. I am soooo proud of my divers, we had fun and I will miss Kristie and Joey’s face next year.

“Big girl pants” – you crack me up Coach Duran

And we had plenty of other top 8 finishes, swims that accrue at minimum of 11 points toward our team totals.  The names are the same names you’ve read about all year, but I don’t think you’ll believe how fast some of these times were:

Some Other Great Swims

I’m more than 5,000 words into this commentary which will require two separate entries into Coach Koehr’s Corner, but there are a still more swims that I simply muct mention:

The Spirit of Seton Volunteerism Does it Again!

In my post meet interview with SwimmingWorld.TV, there was simply no way I was going to fail to mention that the entire meet was run by volunteers.  At Seton, I think we take this for granted, but believe me when I tell you that most people outside of our community don’t.  In fact, many of them can’t understand how it is possible – including the Eastern Officials Association, an official’s labor union that is currently trying to infiltrate VSIS Swimming.

This was our 4th year hosting the State Championship meet.  Only at Seton, would it be possible for a school our size to host a meet like this, and we should be justifiably proud of the example we set for other schools, some of whom could not even muster three timers for finals.  It was especially impressive considering that the meet was four hours from our school.

It would be impossible to mention all of the generous contributions of time and money that lead to the success of this meet, but some parents went above and beyond in the execution of this meet:

Seton Swimming has become something truly special, a community of swimmers, parents and families that is so much more than just a championship swimming team.  This was my 9th year coaching the team, and with a 4-year old in the house, I think I’ll have at least another 14 years of doing this.  Because of the great support that I receive from all of the families of Seton, I’m really looking forward to it!