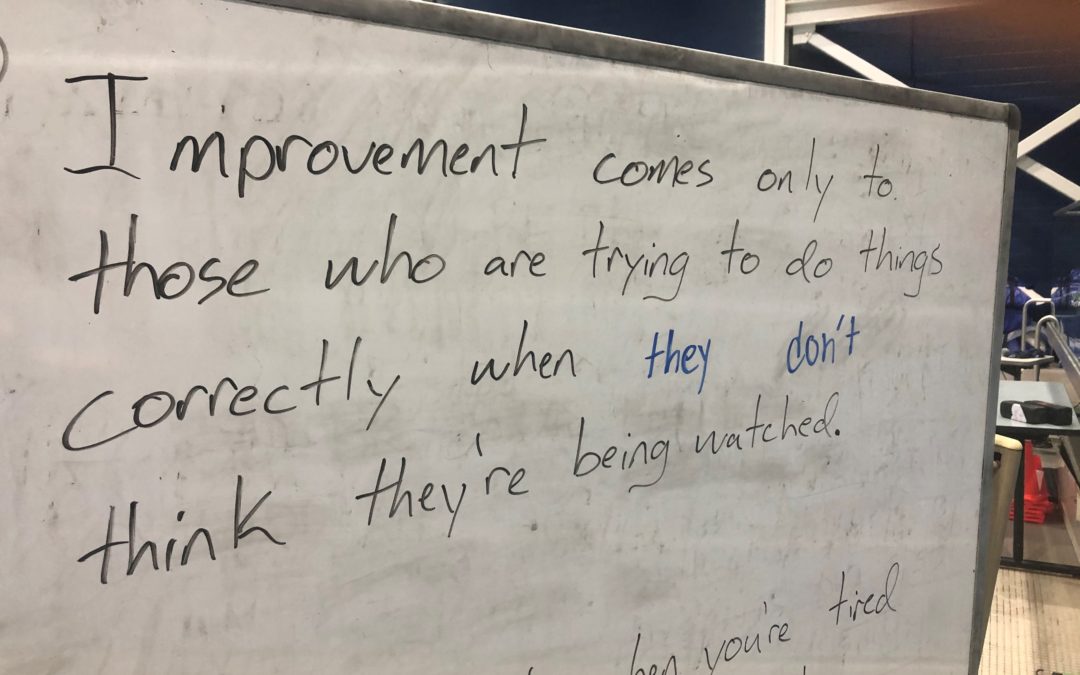 Congratulations to our Seton Boys who won the 11th Annual NoVa Catholic High School Swimming and Diving Championship last night, January 16th, 2021.  The “Holy Grail” traveling trophy will spend the next year at Seton School for the first time ever!

I am so proud to say that we won this Meet is several other ways also.

How about the fact that we had it in the first place?  Last night’s meet was our 5th meet of the season, and all the kids are healthier on nearly every dimension –  physically, emotionally, mentally, and spiritually – than they were at the beginning of the season.

I would be surprised if there were another high school in the State of Virginia that has participated in, much less hosted, five (5) meets so far this season.  When the season is over, and barring any unforeseen difficulties, we will have swum in nine (9) meets – and hosted them all.  That alone is worthy of celebration.

How about the quality of our live-streamed broadcast?  What Paul Fifield and Bill Dealey have done is not short of extraordinary.  Every week, they seem to ramp up the quality another notch.  Now they are even starting to talk about creating the Seton Sports Network, maybe even forming a club for Seton Students to learn about the field of video production and broadcasting.  The uses of a platform as robust as the Seton Swim Team seems never-ending.

And how about the performance of our Swimmers and Divers in the pool?  With only 85 of our 106 teammembers in the water, we had 137 new Personal Records. That is more than 1.5 PRs per athlete!  Even more exciting to me is that we saw several performances that have put us in a much stronger position to compete successfully at the upcoming virtual State Championship meet.  As each week passes, I get more optimistic about our prospects for one (1) or two (2) more VISAA Division II State Championships this season.

Here is how the final scoring turned out:

Congratulations to our Girls’ also for their great finish.

This meet was scored as a championship meet with twelve (12) places scored, and per the scoring rules, relays scored double.  So as with most Seton victories, it came down to our depth and our relays.

Here are the Scoring Swimmers in the meet for the Boys, in order of points scored:

Here are the Scoring Swimmers in the meet for the Girls, in order of points scored:

I mentioned earlier that Relays also made a difference.  That was particularly true on the Boys side.  Going into the 200 Free Relay, our boys had a 48-point lead over Paul VI, but I was worried that they would quickly cut into the lead with the 200 and Free Relays.  I was wrong.

In the Boys 200 Free Relay, Jack Santschi (SR), Jerry Dalrymple (SR), Liam Kellogg (SR), and Nathan Luevano (SO) were seeded well behind the Paul VI Relay.  I did not think I could trust their seed time, but I knew that they had some very fast kids.

In the end, they swam a season-best time, by 1.11 seconds and took the 32 points for first place by 1.46 seconds.  Jack’s lead-off was a season-best flat start time and both Liam and Nathan swam season-best splits.  That finish gave me a great deal of comfort as I contemplated a possible victory.

On the Girls side, the Paul VI relays were just too strong, but because they are a Division I school, I chose to keep my focus on how we were progressing competitively to our potential Division II opponents at States.  I was very pleased with what I saw, particularly in the Girls 200 Medley Relay.

Our Girls 200 Medley Relay of Lucy Garvey (JR), Angie Testani (8), Clara Condon (8), and Mary Pennefather (SO) swam a season-best 1:57.77 – a time that was 2.35 seconds faster than our previous season-best.  And we did that time with an injured Mary Pennefather on the back end.  I was extremely encouraged by what I saw there.

As I attempted to describe as clearly as possible on the live-stream broadcast, the rules of the virtual State Championship meet this year present some significant challenges – but they also present some opportunities.

The challenge is getting the best possible times submitted for the scoring calculations.  The State Championship meet is so exciting and so much fun that our kids generally swim life-time best times nearly every time they hit the water.  This is particularly true with the relays, where the excitement of the meet is compounded with the fun of swimming with your friends.

The opportunity comes from the fact that everyone has that same challenge.  If we can mitigate that disadvantage better than other VISAA Division II teams, we could actually beat relays from other teams that might be objectively better – simply by putting kids in a better position to realize more of their potential.

The Relay entry rules give us even more flexibility.  We can generate an entry time for the Relays in two ways:

So, I’ve been trying to do both – swim some fast relays AND get the best possible set of flat-start times.  The later will be particularly important for the 400 Free Relays.

That is the case for two reasons.  First, the 400 Free Relays are at the end of the meet so it is hard to get a best time during an unexciting regular season meet.  The second reason is unique to our Girls’ team.  Two of our top swimmers (Angie Testani and Clara Condon) are Breaststrokers, and 100 Breaststroke is right before the 400 Free Relay.

If you assume that we’d likely swim our best 400 Free Relay time at one of the season-ending Championship meets, then you will see the dilemma – those are precisely the meets when we are also trying to get the best possible times from our top girls in 100 Breaststroke.

Here’s where the opportunity comes in:  if the State Championship Meet were swum as normal, we’d never be able to use Angie and Clara (assuming they end up being among the 4 fastest) in the 400 Free Relay, but because we can get times from them at different meets, we can have our cake and eat it too.

As with so many things like in life, every obstacle can present an opportunity if you think to look for it.

Our first attempt at getting some good flat start times was the Time Trial events that we added to Saturday’s meet.  That plan worked wonderfully!  Almost everyone did a season-best time.  I’ve posted the top times so far this season for 100 Free, 50 Free, 50 Back, 50 Breaststroke and 50 Butterfly so you can all see where you stand.

We’ll do these Time Trials twice more: at next weekend’s Seton Winter Invitational and between events at the Junior Varsity Invitational.  We’ll use the VISAA Division II Invitational and DAC Champs to try to just rock the relays to take full advantage of our relay starts.  That should put us in a pretty good spot I think.

You can thank all our parent volunteers for the opportunities this will provide for our team.  Because we host our own meets, we are simply able to generate more opportunities than other schools who have not done the work necessary to build the required infrastructure.

Another difference-maker for us this year is our new Diving team.  In VISAA Swim meets, events 9 and 10 are called out as Diving – and they are included in the meet just like the 500 Free or any other swimming event.  Once again, you can thank volunteers (namely Coach Ashley Keapproth and Coach Seamus Koehr) for stepping up and doing the work necessary to get our Diving program off the ground.

I hope that other schools in the DAC step up to do the work required to build a Diving program so our kids have someone in the Conference with whom to compete.  Many VISAA schools have already done so.

Diving made a pretty big difference on Saturday.  Because Diving counts against an athlete’s eligibility (i.e. they can swim no more than two individual events and Diving counts as an individual event), and because you can only have four (4) scoring entries per event, some of our Divers were entered as exhibition.  Not considering whether their scores counted or not, here is how the Diving competition turned out for Seton:

For both the Boys and the Girls, Paul VI took 1st place, and we took all the remaining places with our Divers that were entered officially.

One quick shout-out to the winning Girl’s Diver.  Congratulations to former Seton Swimmer “Mack” Myers who is now a Junior at Paul VI.

137 Personal Records for 85 competitors is just a ridiculous total.  It is yet another data point that proves our basic coaching thesis at Seton Swimming, “The fastest way to make a high school swimmer faster is to get them doing the strokes right.”

Here are the Personal Records that were swum at Saturday night that I have not previously mentioned (I think I’ll start with the Z’s this time):

Here are how some of the other swimmers did who participated in this meet as their own team on Saturday:

The Rest of the Season

We are hosting two more meets before we must cut the team down to just the Varsity swimmers.  I’ll be posting these Meet Announcements this coming week:

After the JV Invitational, the remaining meets for the year will not allow any exhibition swimmers.   Those meets are:

I will be limited for these final two (2) championship meets to four (4) entries per individual event and two (2) entries per relay event.  At most, that will take 16-18 boys and 16-18 girls.

My plan is to figure out how to create the most competitive line-up possible for those two meets, and the swimmers that are included will be designated “Varsity”.  I will make sure I announce who is swimming past January 30th as far ahead of that date as possible.

On so many levels, I was very pleased with what I saw on Saturday night.

We have one month left.  Let’s go get some more championships.

See you Monday morning at 6:19 a.m.  Come ready for the final push.