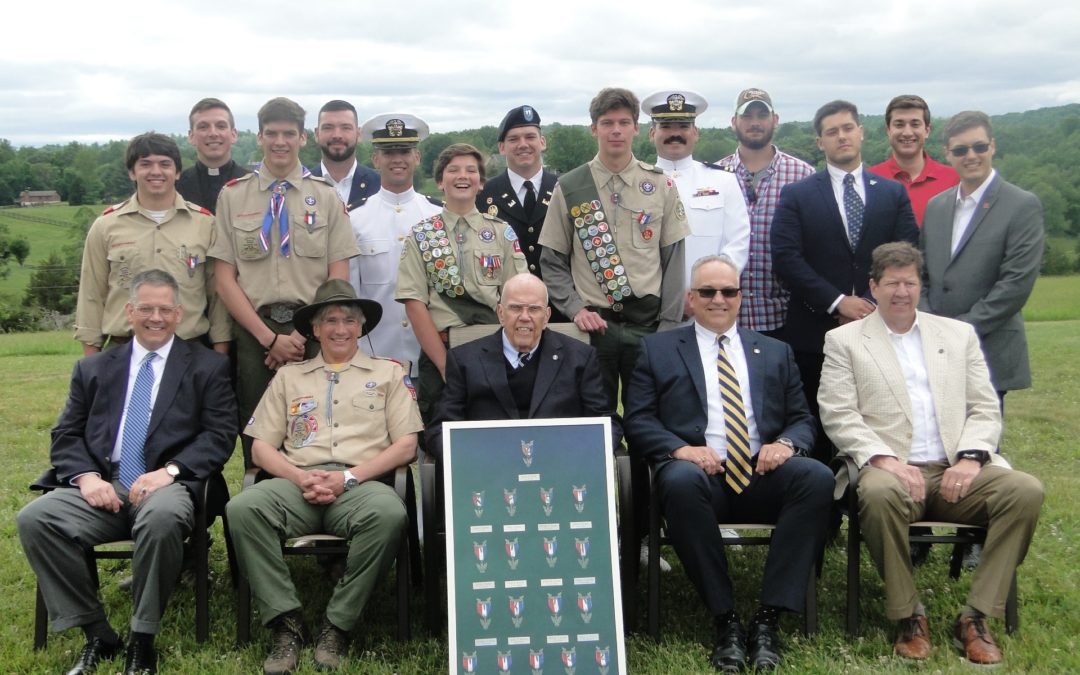 I’m pleased to note that there are many Seton families associated with the Boy Scouts and a number of Eagle Scouts have been or are on the Seton Swim Team.  These families with Eagle Scouts include the Dalrymple’s, Kellogg’s, Santschi’s, Miller’s, and many others.

Here‘s an article from the Fauquier Times about the event.

The Boy Scouts have been a tradition in my family since the late 1940’s.   It is one of the tools that fathers in our family since my grandfather have used to assist us in helping to teach our boys to be men.  As part of that tradition, it has been customary in my family for the grandfather to award the Eagle Scout medal to his grandsons.

Below is the text of both my introduction and my father’s talk:

I am particularly delighted to again be with you to recognize Zackary and Connor as well as celebrate the completion of the Eagle award by three generations of the Koehr family. As many of you know, since 1952 when I earned the award, my four sons and thirteen grandsons have followed in my footsteps and are worthy to be known as Eagle Scouts, men of character, honor and accomplishment. More on this later.

Today, in my few minutes, I’d like to focus on three topics … all of which undoubtedly deserve  more time than we have here … specifically …

I first took the Boy Scout Oath in 1949 when I became 12 years old. It was a great time to be a Scout. St. Louis was still filled with Army-Navy surplus stores selling World War II surplus equipment …. Packs, boots, canteens, mess kits, blankets, sleeping bags and tents, both pup tents and the larger wall. A blue collar family could afford to equip their budding Scout with all the essentials. The Troop owned enough wall tents, used for long term summer camp. Of course none of this stuff was light ripstop nylon but we didn’t know the difference. We were well equipped for overnight camping. The committee also picked up a large, used Army transport truck and reconfigured it for our use.

Troop 20 was one of the oldest Troops in the city with a pedigree going back to the earliest years of Scouting. At the time I believe it was the only Troop in the St Louis Council with a 2 digit number. The sponsoring organization was the Holy Family Catholic Church that served a predominantly blue-collar Catholic population. Principles of the Scout Oath and law were developed and strongly reinforced by the Sisters in the Holy Family School. The Dads were very active … auto mechanics kept our trucks running, carpenters rebuilt the flat bed of the truck to carry Scouts. ..   whatever the need was they could fix. It was my first introduction to the important role Dads played in the entire enterprise.

Our camping experiences is where the rubber really met the road. The Troop had camping privileges to a huge tract of undeveloped Missouri scrub land known as Catawissa, the Indian name for the area 100 or more years earlier. Organized using the patrol method, here is where we learned all the basic camping skills including camping, cooking, hiking pioneering etc which in turn lead to self-reliance, teamwork. We also had a lot of vigorous fun and, unrecognized by us, our leaders slipped in the instruction. It was an all male enterprise and promoted father-son bonding and let boys observe men as role models and how they behave. The underlying philosophy of the entire enterprise was documented by the Scout Oath and law.

I still recall the words .. “On my honor, I will do my best to do my duty to God and to my Country.” Great words! Think about them carefully. They encapsulate the highest sense of patriotism  devotion to God we all strive to achieve. Wouldn’t it be terrific if all our citizens subscribed to this oath.

“To obey the Scout Law”  … Here are 12 precepts for living that include all of our traditional American and family values.

“To keep myself physically strong, mentally awake and morally straight.” Here we have three even better concepts for personal guidance and development. They are the guide stones for a successful, worthwhile life that have led many, many young men to achievement and greatness.

Meaning of the Eagle Award

Eagle Scout is the pinnacle of achievement for young men in the Boy Scout movement. An Eagle Scout is recognized throughout the Nation, and even the world, as a man of character, and honor and accomplishment. To be more specific achievement requires acquisition of the basic skills necessary for a productive life, development of outstanding character, and, finally, assumptions of a number of obligations the award implies.

So Zackary and Connor, you have now become a member of a very select group of young men who have acquired the skills and developed the character necessary for award of the Eagle medal Much will always be expected of you as you travel through life. From now on you must 1.) live like an Eagle .. demonstrating the skills and character I have been talking about, and 2.) give back to all the people who have helped you on the Trail by helping others as they “trail the Eagle”.

Finally, I’d like to share you with you a bit of family tradition … a tradition now carried forward by the 3rd generation.  I’ve brought along our special family shadow box which is now complete.

The medal in the middle with the fading ribbon and slightly different eagle was awarded to me on June 30, 1952, nearly 70 years ago, but I remember it well! My father encouraged me every step of the way but  was always careful not to do the work. Scouting has had a profound effect on my development and success in life and I have always pass its lesson onto my sons … both as their Scoutmaster and their Dad

The other four medals were earned by my 4 sons .. Jim, John, Bernie & Brian.. who are also here today.  Below that the grandsons appear, including:  (read their specific  names). It please me greatly that each of my sons strongly picked up the torch and shared Scouting experiences with their sons. That’s the way life works and where the father son relationship is strong, success is sure to follow. Parental support to young men is critical to their development!

I’ve now run out of grandsons to recognize but fortunately our family continues to grow. Erma and I now take pride in seven great-grandsons … to date. I trust that the Scouting movement will continue to play the essential role in their development that it has for all of us who have gone before.