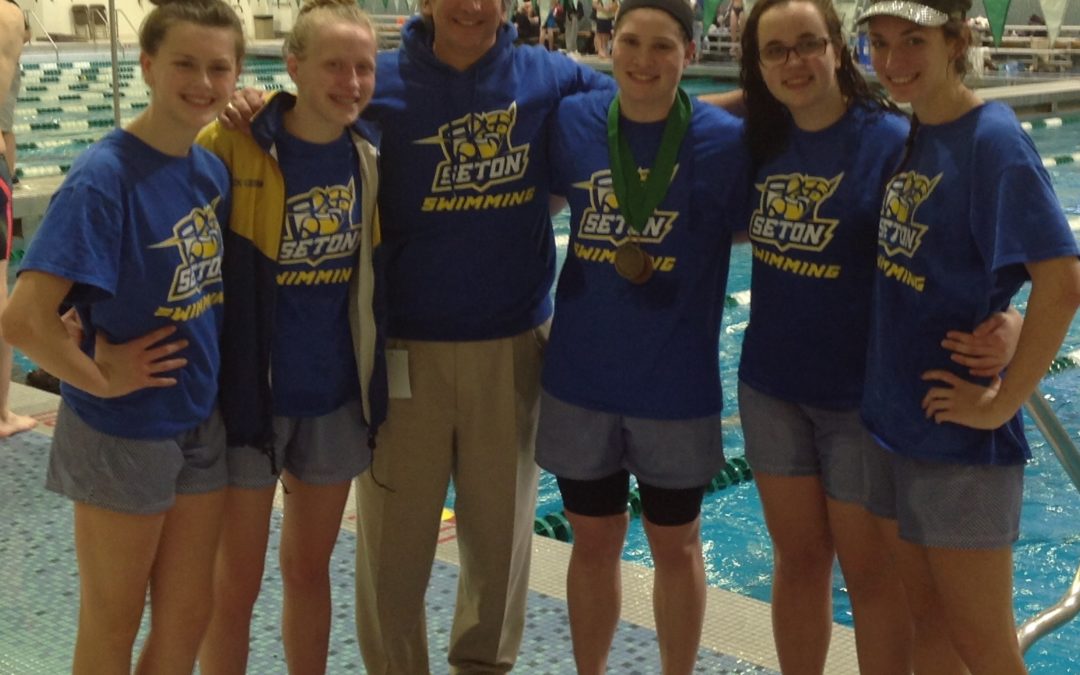 Last weekend, I was able to take a small team of Seton’s top female swimmers up to Loyola University of Maryland for the 2017 National Catholic High School Championship.  The meet featured all of the top teams from Catholic schools up across the mid-Atlantic region with teams coming from as far away as Cleveland, OH.

Congratulations to the members of this year’s National Catholic team:

We all gathered at a beautiful house in the Federal Hill area of Baltimore for a delicious team dinner prepared by the Griffin’s.  After a great breakfast prepared by the Kenna’s and the morning Preliminary session for the Girls on Saturday morning, the girls got to relax at the house while I headed back to Manassas for our meet at Central Park.

When I got back to the house on Saturday night, I found a tight group of girls laughing after a great afternoon together – and I also found a delicious steak dinner prepared by Mrs. Geiran.  It was wonderful for me to relax and get to know these great families a little better.

On Sunday morning, the girls had another great breakfast, this time prepared by the Cuccinelli’s, we headed over to the pool for the Finals that was to begin at Noon.

Seton has been going to National Catholics since 2005 when the meet was a Villanova University.  I was just looking back at some old results – boy was that fun!  I have such great memories of the Seton gold medalists in particular, including Kevin Koehr, Nevin Cook, Jameson Hill and Alex Doonis.  I especially remember when Jameson Hill broke a 30 year meet record set by the Montreal Olympian Buddy Hackett when he was in high school.

So you can imagine how much fun it was for me to relive those great moments all over again in the person of Anna Kenna.

In January 2015, Anna Kenna was a freshman with very little experience swimming at a high level.  All of the top girls at National Catholics had seen each other at the biggest USA meets, and when Anna went 1:00.06 in prelims, I don’t think she raised many eyebrows.  After all, she was just a high school swimmer.

When Anna came back in the 2015 Finals to go :58.69 and take the gold medal, I remember overhearing girls and their parents from Bishop O’Connell on the pool concourse asking, “Who is that Anna Kenna?”

So two years later (the 2016 meet was snowed out), at the 2017 meet on January 21-22, 2017, most of the top girls were not surprised to Anna come into the meet seeded 4th with that same :58.69.   They definitely knew who she was, even though this was her first year of serious training with a USA Swimming team.  The very top seed was a new girl from outside of Cleveland, OH who was seeded at :56.88.  Was that her best “shaved and tapered” time or could she do that “in season”?  We were about to see.

In the Preliminaries, meets are typically circle seeded meaning that the top 3 seeds are in the fast lane for the final three heats.  Then they seed in 4 through 6 in those same final three heats and keep going until the lanes are full.  That meant that Anna, as the 4th seed, was in the final preliminary heat right next to the top seed from Ohio.

I imagine that Anna is absolutely sick of hearing me remind her of what she already knows so well – the winner of these big backstroke races is usually the girl who can take the most pain on the third wall.  In this case, Anna went out in 28.58 and was .28 seconds behind the top seed at the 50, but she came back in 29.64 and took first place in the Saturday heats – and the top seed for Sunday’s finals – with a PR and Team Record :58.22.  She won by only .15 seconds, and most of it was on the third wall – Anna also has a tremendous finish.

After a relaxing Saturday afternoon and evening at the rental house, Anna seemed relaxed when we got to the pool on Sunday late morning.  She graciously gave up her slot for the consolation finals of the 200 Medley Relay to Caroline Griffin, but then got her ire up after a Bronze medal in the 50 Free.  She swam a high school PR :24.65, easily her fastest unrested time, but you could see she was not pleased.  I decided it was best to leave her alone.

Twenty (20) minutes before the backstroke final, she was asleep on the deck.  How could she sleep at a moment like this?  Now this is a championship swimmer!  I decided it was time to get her up and back into the water.  After a quick warm-up, she was loose, gave me a modest little smile and moved behind the blocks with a characteristic focus.

The Finals race was over from the start – almost literally.  She broke out off the start at about 13 meters with nearly a half body length lead.  On the turn, she extended her lead with another powerful underwater.  When she turned at the 50, I looked up to see her split – :27.70!  Her PR for 50 Back is :27.03 and she just went :27.70 to her feet after a turn!  I knew it was going to be a great time – but could she hold on after such a fast start?

Yes she could.  In fact, she extended her lead even more on the second and then the third wall and reached hard for the Gold medal by more than a body length!  I looked up at the board and could not believe what I saw – :57.00!

Let’s put that time in perspective a few ways:

Anna Kenna is a very special athlete who not only has the ability to excel in her own right, but she can bring up the other swimmers around her.  She brought me a lot of joy this past weekend – I can’t wait to see how far she goes in the future.

Let’s Not Forget the Other Great Swims!

Anna wasn’t the only one who swam well.  We had two other swims in the Finals and several other great swims in the preliminaries:

Next Year is Going to Be Even More Fun

I’ve been watching this crop of young swimmers that we have on the Seton team, and I simply cannot wait to bring a bunch of them to Baltimore on the third weekend in January for the next several years.

Who’s going to shine in the future?  I’m excited to see the answer to that question.