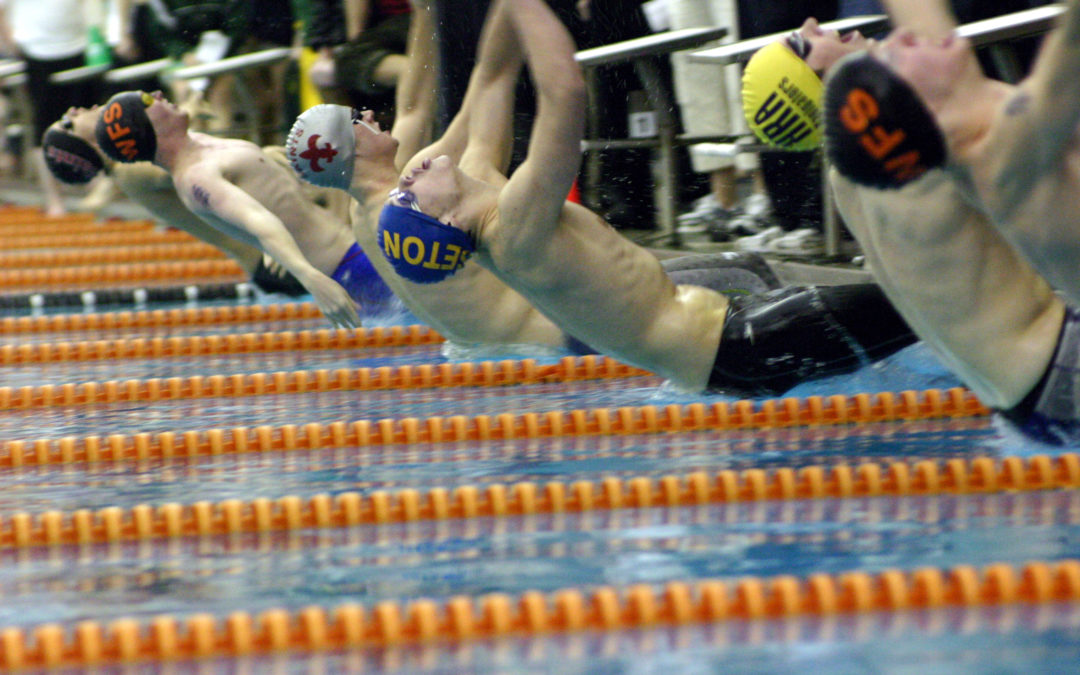 Seton Swimming returns from the 2005 VSIS State Championship with a State Champion, 2 All-State Honorees, an High School All-American Consideration swimmer, and eight top-8 finishes.  The Boys finished 9th overall and the girls finished 14th.  Our 9th place finish is the best-ever showing for Seton Swimming.  Coach Mulhern also made his High School Swimming debut with a wildly popular rendition of the National Anthem.  Not a bad weekend’s work.

In the finals Nevin took the lead immediately with a tremendously fast start.  He built his lead into the turn at 50 yards – his split was a blazing 29.41.  His lead began to slip at 75 yards and seem to disappear with 10 yards to go.  The place was going to crazy.  Both Nevin and his opponent approached the finish on an odd stroke – the HRA swimmer took another short stroke and Nevin made a long reach to the wall.  We all looked up at the board – lane 4 (Nevin) was 1:02.62 and lane 5 was 1:02.63 – Victory!  How close is .01 seconds?  Nevin has bruises on the inside of each knee that resulted from the power with which his legs came together on his final kick to the wall.

In the finals, we all knew that Kevin was much faster on top of the water and Pinkston was much faster off of the walls where his butterfly body dolphin was so strong.  The very exciting race went back and forth.  Pinkston led off the start and Kevin beat him into the first turn.  Pinkston took the lead off of the 2nd turn and Kevin beat him to the 50.  Kevin’s 50 split was an incredible 25.75.  Splits in the 100 are measured after the flip turn when your feet touch the wall, so this may have been his fastest 50 yard backstroke ever.  (His fastest 50 backstroke ever was swum the day before in the relay at 25.30.)  After the second turn, the pattern repeated with Pinkston taking the lead.  They went into the final wall at exactly the same time.  This time however, Pinkston’s body dolphin got a large enough lead that Kevin just couldn’t make up the deficit.  He finished the best race of his life with a personal best :53.25, earning All-State honors with a 2nd place.

– Our girls 400 Free relay took 13th.  Caitlin Harris led off with a 1:03.09, followed by Kimberley Melnyk and Jessica Dunn who both crushed their own personal records (unofficially since it was with a relay start) with a 1:01.92 and a 58.49 respectively.  Meg Seale closed the relay with her fastest split this season, a :58.32.

Great season – the traditional of excellence in Seton Swimming continues,