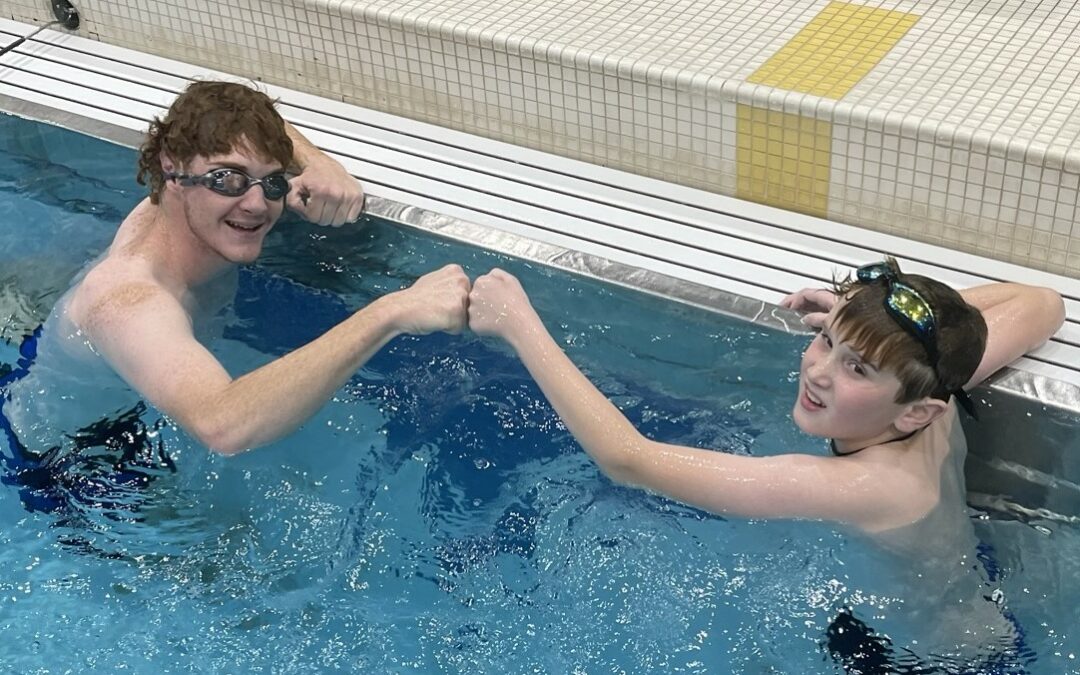 Congratulations to Seton Swimming for completing our 11th Annual Cystic Fibrosis Children’s Miracle Network Swim-a-thon.  As a team, we have raised $12,626 so far (as of 12/31 at 8:00 p.m.) and had 55 swimmers participate.  An amazing 54 of them were able to complete at least 200 lengths of the pool!  (More on the highlighted “at least” in a bit).

To put that distance in perspective, it is the equivalent of:

We will keep the fundraising site up and running through January 15th so that each Fundraising Team has a chance to finish the job.  Here’s a link to our latest totals.

And we’ve had some outstanding fundraising performances from some individuals on those teams.  Here are some of the top performers:

Today’s swim was truly a great accomplishment for many of these swimmers, particularly some of the younger 6th and 7th graders.  Aside from the great work we did on behalf of Cystic Fibrosis, I hope that many of us learned a valuable life lesson – We can always do more than we think we can do.  I recalled a comment last year by former Seton Captain Meghan O’Malley who reminded me of something the Navy SEALS say:  “When you think you are completely maxed out, you’ve reached 40% of your potential.”

This topic is so important to me that I chose to make it the subject of my Swimming Awards Banquet Speech three years ago: Swimming Awards 2020-Let’s Literally Astound Ourselves

One swimmer that learned that lesson today was first-year swimmer Jack Gregory (11).  Jack is not just in his first year of swimming with Seton, he is in his first year of swimming competitively ever.  When Jack arrived, he had no idea that he was going to have to swim 200 lengths of the pool – personally!  “I thought our whole team had to complete 200 lengths”, he told me afterwards.  And by “afterwards”, I mean after he had completed 200 lengths of the pool – personally!

In his humility, after he finished, Jack tried to apologize to me for making everyone wait.  I just smiled and said “Jack, I would have stayed until midnight if you were willing to keep trying.  If you didn’t quit on yourself, I certainly wasn’t going to quit on you!”  I’m so proud of Jack Gregory that I’m still smiling here in my office on New Year’s Eve.

Another reason I’m still smiling was one of more heartwarming scenes I’ve seen in my nearly 23 years coaching Seton Swimming.  Daniel Kohlhaas is a 6th grade on our Seton Family Homeschool Team who came to swim.  One key point you should know is that Daniel has Cystic Fibrosis, a disease that impacts his lungs – and he still came to try to swim 200 lengths of the pool!

As Daniel was swimming, another first-year swimmer, Senior Tim Blanchette could see how hard he was fighting so Tim starting swimming next to him to encourage him.  (Remember that Tim is a first-year swimmer on our team also.)  Then Tim would move on, catch back up, and swim with him a bit further, sharing encouraging words with each pass.

It wasn’t long after that the Tim passed a message to me through Coach Joe Hurley with a proposition.  Tim wanted to know if I would accept a combined total of 400 lengths between the two (2) of them.  In other words, Tim was offering to swim some of Daniel’s lengths also.

It took me a moment to absorb the magnitude of what was taking place.  Tim, in a tremendous example one of our GEMS values – Sacrifice – was offering to swim MORE than 200 lengths of the pool!

If we just did what we are capable of doing, we would literally astound ourselves.  Wasn’t it great to see how astounding extreme kindness can be too?

The Big Reason We Swam Today

Let’s not forget the cause for which we all fought on a cold New Year’s Eve – the childhood disease, Cystic Fibrosis.

Former Seton Swim-Dad Robin Given started us off with a heart-felt talk about the impact of the advances in Cystic Fibrosis treatment on his family.  With the help of Sarah Given, here is the long version of what he told us:

Cystic Fibrosis is an inherited disease that affects the lungs and digestive system of about 35,000 children and adults in the United States (70,000 worldwide). A defective gene causes the body to make a dysfunctional chloride channel leading to an abundance of thick sticky mucus accumulating in the body.

This mucus creates a host environment for bacteria leading to serious lung infections, scarring, and progressive loss of lung function. Respiratory failure has always been the biggest threat to people living with Cystic Fibrosis.

However, thick mucus also obstructs the pancreatic duct and prevents the body’s digestive enzymes from reaching the duodenum where they are needed to break down fats, proteins, and carbohydrates for absorption by the body.

Cystic Fibrosis was discovered and named in 1938 when many children weren’t living to see Kindergarten.  Instead, they were succumbing to an unnamed familial illness. Early treatments were targeted at thinning the sticky mucus and treating lung infections. Children would be tipped side to side and head down and have their chest clapped on for hours a day by parents to loosen the thick mucus.  Still, their longevity was not terribly improved.

30,000 people in the US are affected by Cystic Fibrosis, but this is a relatively low number compared to diseases like diabetes and cancer which affect far more people and therefore command more of the federally distributed research dollars – so CF families were on their own.  In 1955 a group of parents and their friends came together to form the Cystic Fibrosis Foundation and started fundraising for a cure.

In 1989 Dr. Francis Collins, former head of the NIH, while working on the human genome project, discovered the gene for Cystic Fibrosis on the long arm of chromosome 7.  This led to a deeper understanding and opened a new avenue for treatments.

Cystic Fibrosis is carried on a recessive gene, meaning both parents must be carriers to pass the illness to their children, and each child has a 1 in 4 chance of being born with CF.  Cystic Fibrosis is widespread across the globe affecting nearly every ethnicity; however, it affects people of Northern European descent most often, with Ireland having more CF patients per capita than any other country, even today.

After the discovery of the CF gene, many new therapies were trialed but ultimately failed or only resulted in modest improvements. Each celebrated, each funded by donations from regular folks, but the longing for a cure remained.

In 2013, this new drug helped approximately 4% of the population who were enjoying incredible results. But the rest waited.  Finally, in 2015, a new and improved potentiator/corrector called Trikafta was made available to 90% of the patients with the most common genetic combination of CF, and the results were tremendous!

Today, on the day of our swim-a-thon, the median life expectancy for people living with CF is 53!  But it’s 53 for people who are 53 now. For younger people like those in our community, the sky is the limit, and their lives are expected to be rich and long!  This was made possible by donations from people like you, who did this work and gave this incredible gift to your friends.


Here is one incredible story to share from this year in the Cystic Fibrosis community:

A mother who didn’t have CF was carrying a child with CF and started taking Trikafta at 20-weeks of pregnancy when the baby in utero started and showing signs of echogenic bowel.  This meant that the baby was at risk for developing an ileus at birth which would require emergency surgery.  The baby’s bowel cleared, and the child was born with a normal bowel requiring no surgery.

This is a hopeful time for Cystic Fibrosis, where 94.6% of pregnancies were terminated when CF was discovered, new treatments are now available.

There are a number of families close to the Seton community affected by Cystic Fibrosis and all of the life limiting challenges it imposes including the Given’s, the Kohlhaas’ and the Manley’s.   The wonderful news is that scientists are closer than ever to a cure.  The scientists we are supporting at the CF Foundation and Johns Hopkins University are studying new medications right now that hold the promise for a normal life for those who struggle with Cystic Fibrosis.


There is still no cure for Cystic Fibrosis and the new drugs work for about 90% of the CF population, meaning 10% of people with CF are still waiting for a medication that will work for them. Our work is not done.

At the conclusion of his talk, Mr. Given related to us how, when his daughter was born with Cystic Fibrosis, the doctors told him and his wife Sarah that their daughter likely would not live past the age of 24 years.

And that is why we swam today.

Here were the swimmers who performed so well this morning:

One last thing: Thank you to so many Seton Swimmers who hung around to the end to cheer for their teammates.  I am very pleased to say that I saw more than I can possibly list here, so I hope you get a chance to look in the photo gallery (here) so you can see pictures of them cheering for Tim Blanchette with Daniel Kohlhaas and for Jack Gregory.

Remember the “S” in our GEMS?  Sacrifice – We offer it up, we love all our teammates.  This was a great example of the love of which we speak.

I’m very proud of what we accomplished today.  Not only did we do some small part to help find a cure for Cystic Fibrosis, but many of us also learned a valuable life lesson: that we are capable of so much more than we think we are.