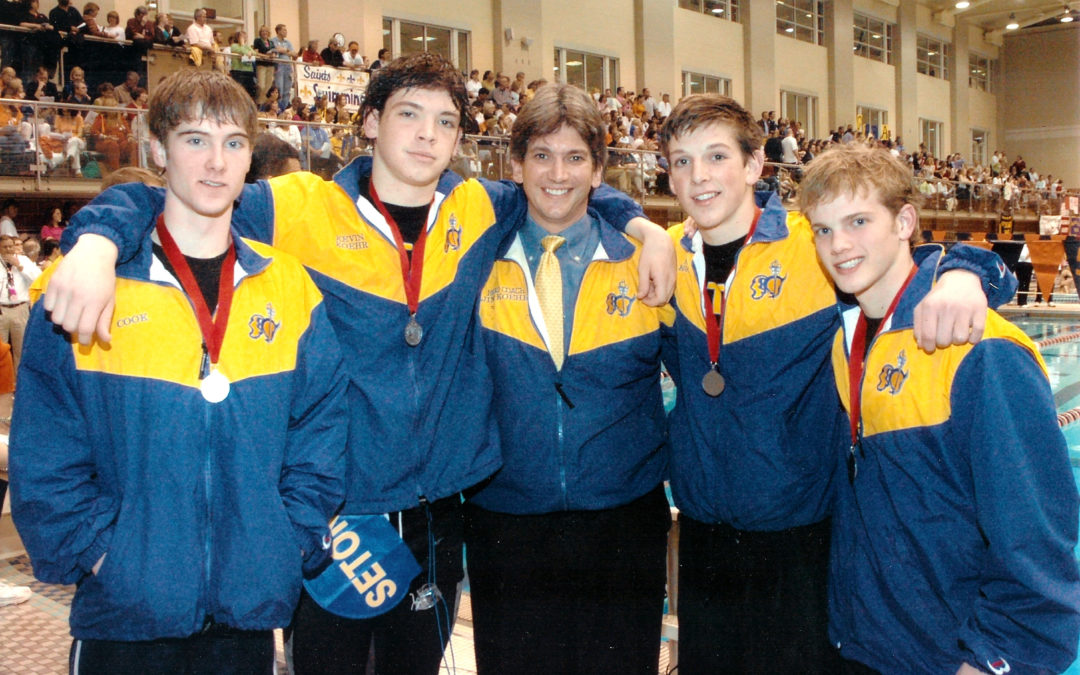 In the process, Seton earned one gold medal, three silver medals, and 11 top-8 finishes.  All 11 of our top-8 finishes were the fastest among competitors from Division II schools.  We also set 8 new team records and established 18 new personal records.

We brought 28 Swimmers down to UVa as our State Team.  The team included:

The fastest 8 times in the preliminary heats qualify for the Championship finals.  We had 11 top-8 finishes, including one State Championship:

Kevin Koehr – Kevin won the State Championship in 100 Backstroke by over 2.5 seconds with an All-America time of 51.98.  Kevin set the mark in preliminaries, which put him into the finals as the top seed.  I think we won the spirit award during his race in finals.  The top seed is honored with the right to select the psych music to which the top-8 finalists march up to the blocks.  Kevin selected “Stayin’ Alive” by the Bee Gees.  The entire Seton team, including Coach Mulhern, lined the route along the pool’s edge and did their best John Travolta impressions.  When Kevin walked by, he was mobbed by the team.  At the very beginning of the actual race, when Kevin surfaced off of his start at about 13 yards, Coach Higginbottom turned to me and said “Goodbye”.  The race was never close after that.  Kevin also took 5th place in 100 Free with a new Seton record of 48.69.  The 100 Free final featured a new State record, two guys under :47 and 7 guys under :50.  It was very fast.

Nevin Cook – Nevin took the Silver medal in both 200 IM and 100 Breastroke, establishing new team records in both events.  He swam 200 IM in 1:58.12 and 100 Breaststroke in 59.31.  Incredibly, both of these times were faster than his two gold-medal performances at the National Catholic High School Championship.  The winner of 100 Breastroke had to break a 26-year old State record to take Nevin.

Kevin and Nevin tied for 5th on the list of individual boys scoring the most points at the meet.

Boys 200 Medley Relay – This race was the highlight of the meet for me.  Kevin Koehr, Nevin Cook, Bryan Morch and Sean Koehr entered the meet seeded 3rd with a time of 1:42.38.  In prelims, they swam a very fast 1:41.38, to win their heat and enter the finals seeded 2nd, behind Hampton Roads Academy (HRA) and ahead of Hargrave Military Academy and Paul VI.  Based on the original seed times, we knew that Hargrave was capable of going faster.  The race during the finals that night was amazing.  Kevin swam 50 back in 24.52 and gave us a 2.1 second lead over HRA and a 1.8 second lead over Hargrave.  Nevin Cook split 27.05 in 50 Breast to extend the lead another 1.3 and 1.5 seconds, respectively.  Then Bryan Morch had the swim of his high school career.  He swam 50 Fly in a very fast 25.07.  Unfortunately, HRA had the State record holder in 100 Fly split an almost unbelievable 22.37 (that time would have placed 2nd in Men’s 50 Free).  After the fly leg, we were still in the lead.  Sean Koehr was our anchor leg against an HRA swimmer who placed 4th in the 50 Free.  Sean split the best time of his career, a 23.18, but he was just unable to hold off the HRA swimmer who swam 50 Free in 21.73.  (Before this season, our team record was 23.48)  Sean was, however, able to hold off the anchor leg from Hargrave to preserve the silver medal.  Our time?  1:39.82!  Just .08 seconds off of All-America consideration and a new Seton record by over 2.5 seconds.  The difference in the race?  Bryan and Sean shaved nearly their entire bodies between prelims and finals, and then they both had the swims of their lives.  I wish I had a picture of Kevin Hughes shaving Sean’s back!  We ended up beating PVI’s “A” relay by nearly 2 whole seconds.

Girls 200 Free Relay – Our 200 Free relay team of the same four girls (Jessica Dunn, Melissa Dunn, Lea Mazzoccoli and Katie Planchak) took 8th with a new Seton record of 1:44.78.  In the preliminaries, Melissa Dunn had an excellent lead-off leg, swimming a 26.91 and Lea Mazzoccoli swam her best split of year with a 27.05.  Jessie and Katie brought us home with splits of 25.48 and 25.34, respectively.  That split for Jessie was easily her fastest ever.  This very strong finish helped us squeeze into the championship finals, just ahead of a very strong Collegiate School out of Richmond.

The 9th through 16th fastest times in the preliminary heats qualify for the consolation finals.  Consolation finals are very important because these swimmers also score points for the team.  We had three other top-16 finishes that helped seal the State Championship for us, including:

Bryan Morch – Team Captain Bryan closed out his senior season on a real high note, taking 14th in 100 Fly and swimming a lifetime best time of 57.09.  His best time coming into the meet was 58.38, which was not among the top-16 fastest entries.  He knew that it would take a great performance in the preliminaries to get him into the finals – Bryan delivered!  In prelims, he used a tremendous start and very fast 50 split (26.17) to finish in 57.43 – tied for 15th!  He came back to finals, shaved for the medley relay, and ready for speed.  In the finals of 100 Fly, he cut more time, finishing in a new PR of 57.09, and moving up to 14th.  (I told Bryan that if he would have shaved his armpits, he would have gone 56.99).  Congratulations on a great career at Seton.

Sean Koehr – Sean had the most amazing meet of his life.  Not only did he swim his lifetime best splits at the anchor of our Silver Medal medley relay, he placed 13th in 100 Breaststroke.  Coming into the meet, Sean’s 1:09.11 in 100 Breast was not supposed to be a factor at all.  During prelims, he shocked everyone, including himself, when he dropped his time almost 2.5 seconds to a 1:06.63!  You should have seen his face when looked up at his time.  He kept checking out his lane number to make sure that he was looking at the right time.  That put him into the consolation finals with a chance to add to Seton’s lead among Division II boy’s schools.  In the finals, incredibly, he cut another second from his time to take 13th with a 1:05.66.

We had several other swims that I really enjoyed:

Caitlin Harris – Captain Caitlin concluded her final season at Seton with good swims in the 200 and 500 Freestyle.  Her 200 had a particularly strong last 50.  She passed two other competitors in the last 10 yards.

Kimberley Melnyk – Kimberley improved her 500 Free time during the prelims by 4.71 seconds to a new PR of 6:09.52.  At the halfway mark, she really turned it on and began to pull away from the some of her competition.  I expect Kimberley to break 6:00 minutes next season.  Kimberley also led off one of our Girls medley relays.  The underwater portion of her backstroke start looked really good.

Tony Minarik – Tony outdid himself in the 200 Free Relay when he split a 25.43 with a relay start.  In a meet last November versus Bishop Ireton, Tony swam the 50 Free in 30.53 seconds, and even that was a tremendous improvement from his first day of practice.  To bad Tony is a senior – I can only imagine what he could have done with swimming at Seton had he started earlier.

Meghan Morch – Meghan had a great start and a great lead-off 50 in her 100 Free preliminary race.  She finished with a new PR of 1:03.59, .31 seconds fastest than her previous best.

Danielle Smith – Danielle broke :30 in the 50 Free for the first time this season in her relay split on the 200 Free Relay.

Laura Talbott – Laura joined Meghan on the same relay and broke :28 with a relay split for the first time in her career.   On the 400 Free relay, Laura set an official PR while leading off from a flat start.  She swam 100 Free in 1:02.42, which was 1.23 seconds faster than her previous best.

The State Championship Meet is the highlight of every season.  We had a great time down at UVa.  Thanks to Mrs. Morch, our hotel arrangements worked perfectly and we had great lunches each day between prelims and finals.  Mrs. Morch, Mr. Smith and Mr. Kenna even arranged for us to have an impromtu pizza party in the conference area of the hotel on Saturday night to celebrate our State Championship.

I could not be more grateful to everyone who has helped this team become such a big success this year.  There are so many people to thank, but I especially want to recognize our Assistant Coaches, Pat Mulhern, DD Ross, and Sam Higginbottom, and our Team President Chris Cook for their great work this season.  The kids all benefited from your outstanding work.

I will really miss the seniors, but after a long summer’s rest, I know I will be charged up next Fall for the return of swimming at Seton.  No matter your natural ability, there’s place for you on our team.  Everyone plays a valuable role.  I hope to see all of you back next season.