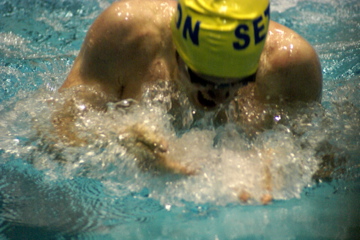 Nevin Cook ‘08 was one of the best swimmers in the history of Seton School.  During his time at Seton from 2002 to 2008, Nevin was dominate in nearly every event, particularly 100 Breaststroke and 200 IM.  In 100 Breaststroke, Nevin won All-America honors, three (3) National Catholic High School Championships, and a State Championship.  In the 200 Individual Medley, he was an All-America, a National Catholic High School Champ, a State Champ, and a State Record Holder.

In this blog, I hope to explore the secrets of Nevin’s technique that made his Breaststroke so fast.  Let’s start by taking a look at one of his National Catholic High School Championship swims when he was only a sophomore:

Now let’s start to break down the technique that allowed Nevin to swim Breaststroke faster than the vast majority of our team swims freestyle.  I’ll start with a slow-motion video of his stroke from underwater, and then I will highlight the key elements that you see.

In this first picture (below), you see Nevin in what you should all recognize as the “Nevin Position”.  He’s completely stretched out and completely underwater.  His arms are high, and his chest is low. In this picture, he has just finished his kick so you can see him clapping the bottoms of his feet together to get the most he can out of the final part of the kick.

Remember, with Breaststroke, all we are really doing is going from Nevin position to Nevin position as fast and powerfully as possible so we can cover the most distance in the most streamlined position possible. 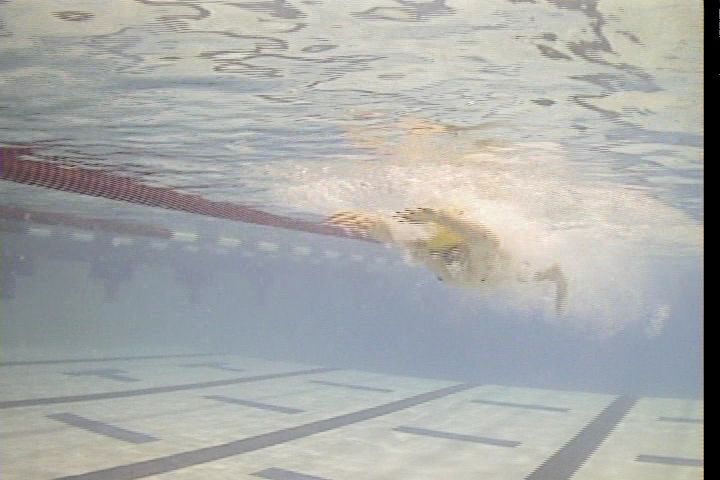 Once his glide starts to slow down, he needs to start his next pull.  In this picture, you can see that he’s not pulling backwards like you might expect.  What he’s really doing is sculling outwards, which as we learned in practice gives you some pretty good propulsion forwards.  As he is holding on to the water during his scull outsweep also notice how wide he’s going.  Nevin is trying to “grab” as much water as he possibly can here. 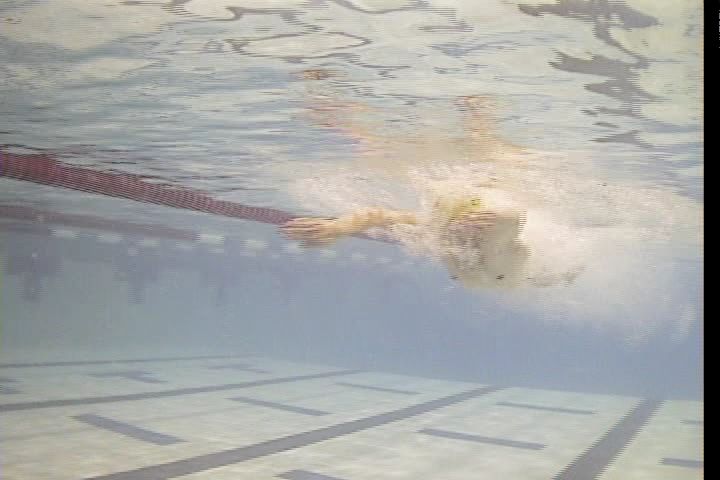 And the biggie – look at his legs.  Nevin has almost completely finished his pull, and his legs are still completely straight with his toes pointed.  This allows him to get the maximum benefit from his pull before he starts his kick. 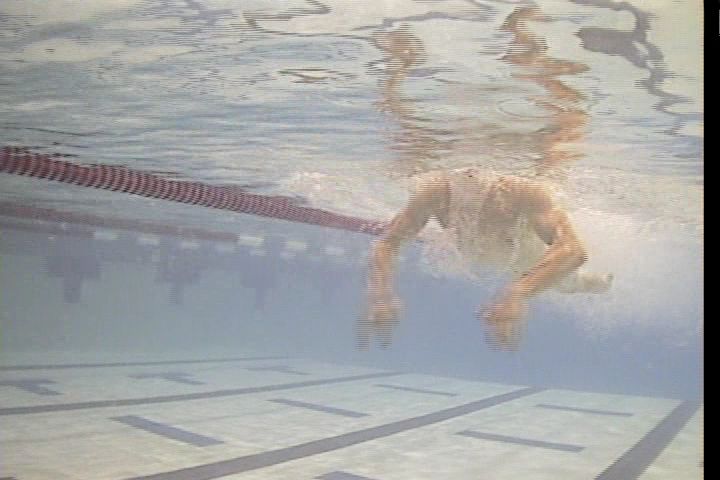 Look at his legs now.  He finished his pull, he finished sliding his hands up along his stomach and chest, and he is getting ready to “shoot” his hands forward – and his legs are still straight!

You can see it better in the slow-motion video, but another key at this point in the stroke is to get out of this position as quickly as possible.  You might hear me say “quick hands”.  Nevin wastes no time in his recovery getting his arms extended, as you will see in the next picture.  Pausing at this point is a very common mistake, and it is deadly to your speed. 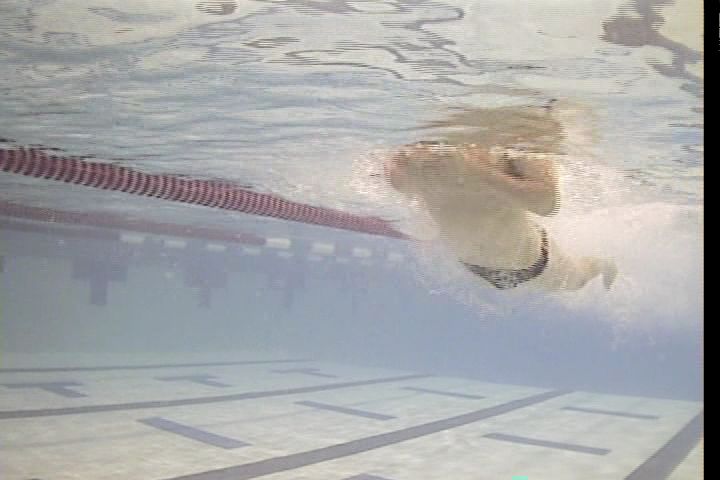 It is only when he is “shooting” his hands forward that he begins his kick.  That is another one of the secrets of a great breaststroke – kick as late as you can. 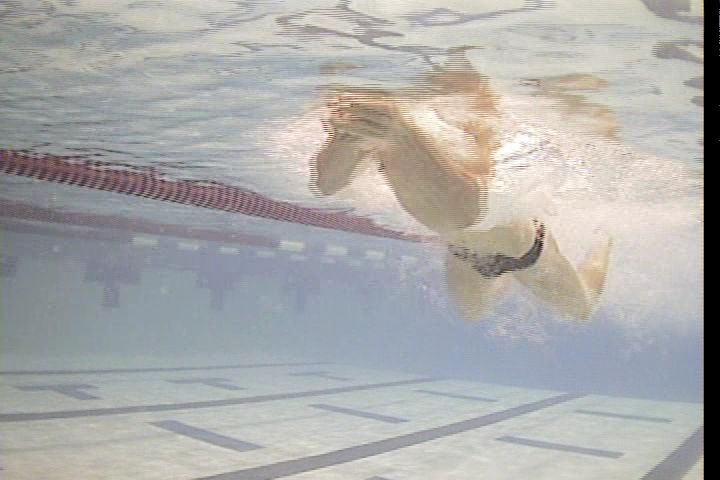 See how late Nevin is kicking in this next picture?  He’s at complete extension with his arms and his head and chest are completely down.  This ensures that, when he kicks, he can get the maximum benefit without anything slowing him down.    The key point here: He has finished his pull completely before he starts his kick. 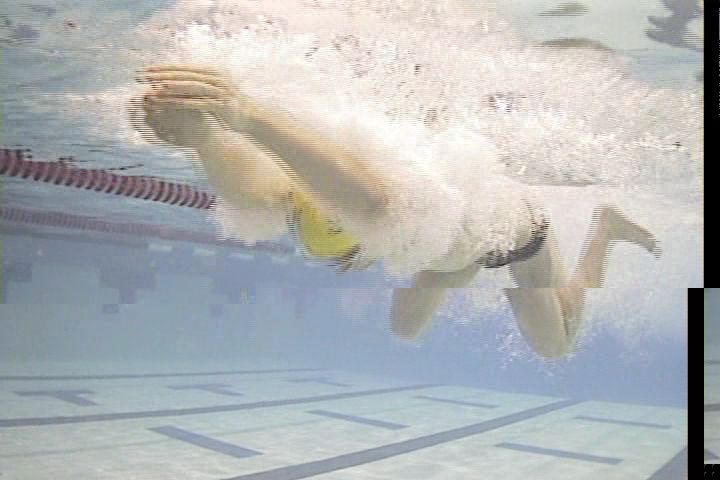 He is also going to complete his kick before he starts his pull.  And in between his kick and his pull, he’s back to the “Nevin Position” for a big (if brief) underwater glide so he can take full advantage of the speed he just generated.

Here’s how Nevin described it all to me in a recent e-mail exchange:

Breaststroke is all about timing and explosion.  The fastest you are ever going is in streamline (i.e., the “Nevin Position”), and the only reason you take an explosive stroke is to regain the speed you lost in streamline due to drag or resistance.

Timing is important because knowing when you’ve slowed down too much is key.   For example, more effort is needed to move a car from a stopped position than one that is already moving forward.

Explosion is key because each stroke you take is a trade-off.  You are regaining speed at the expense of increased resistance.  The thought should be: “Regain the speed and get back to streamline ASAP”.  Don’t take too small/weak of a stroke though or you won’t gain enough speed to have made it worth the resistance cost.

I always liked breaststroke because I thought it was the easiest to understand:

One day, I hope to have Nevin join us in the water for our annual Homecoming Meet.  It would be fun to reunite him with teammates Kevin Koehr, Brian Morch, and Fr. Sean Koehr from our first State Championship Team in 2006.  Their medley relay was something to behold, and they still own our team record nearly 16 years later.

More than half of you on the team will be swimming breaststroke at our upcoming Homecoming Meet.  I’m looking forward to seeing the secrets of Nevin Cook’s breaststroke become fully revealed at the Freedom Center on Saturday.