This is Not Your Father’s DAC Anymore 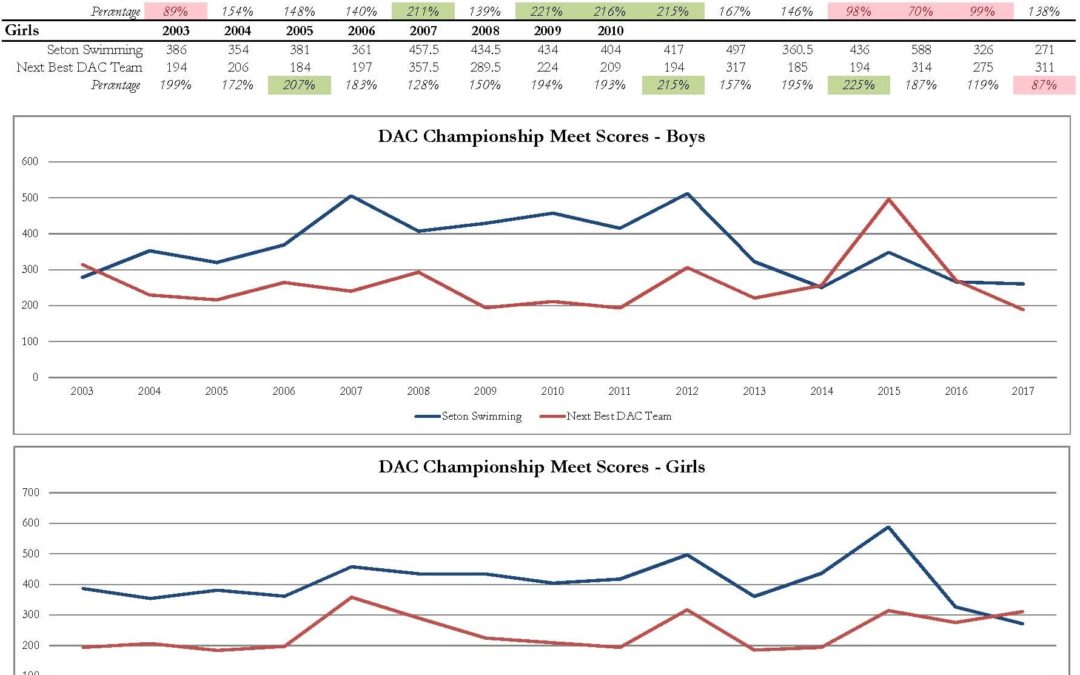 Last Saturday, we out to the beautiful Fitch WARF in Warrenton, VA for the annual Delaney Athletic Conference championship meet, and once again, it was a very competitive meet for both our boys and our girls.

For the first time, the meet was hosted by Trinity Christian School, who certainly ran the best Conference Championship meet that I have been a part of – and I’ve been a part of DAC Swimming since 2001.   It turned out to be a great team effort with Seton and WCDS for many aspects of the meet, but with the great parent volunteers that we have at Seton, the TCS/Seton/WCDS team was unbeatable in the meet-running department.  I was so pleased to watch Charles Seltman, Bill Dealey, Hank Konstanty, John Kleb, Robin Given, Therese Griffin, Alex DuMez (WCDS) Chris Caron and Carole Pechie step up to help wherever it was necessary.  It was also great to have Mr. Westhoff on deck supporting the effort!

Last year, our boys lost to Fredericksburg Christian by only four (4) points, but this year, we were able to avenge the lost with a 72 point victory.  The reverse happened for our Girls – last year, our girls beat the very strong new-comer, Trinity Christian School, by 51 points.  This year, Trinity Christian come back with an even stronger team and beat us by 42 points.   That doesn’t mean that Seton didn’t swim well though.  Prior to the meet, I scored the psych sheet and we were looking at a 64 point loss.  So we outswam our seeds to the tune of 22 points – pretty strong.

For our girls, this was the first time in the 23 year history of DAC Swimming that our girls were beaten in the Conference Championship meet.  The loss of so many seniors last year plus the loss of three key upperclassmen on the girl’s side left us unable to handle the talented – and young – TCS girls team.  But, as anyone who watched our middle school girls this season knows, we’ll be back!

Congratulations Trinity Christian School Girls!  All of us who watched their Coach, Andy Gingrich, their Athletic Director, Cheryl King, and their DAC Champs meet host, Jennifer Fletcher, work last Saturday night could have nothing but admiration for what they have put together in such a short time.  I think they can give Hampton Roads Academy a run for the VISAA Division II title and, at a minimum, I don’t see anyone who can keep them from winning the State runner-up – except maybe Seton  😉

Fortunately for us though, the Athletic Directors decided earlier this year that the actual DAC conference champion would be determined by the results of everyone’s first meeting during the regular season.  By virtue of the fact that we were undefeated against all conference teams during our first regular season meetings, both our Boys and our Girls are repeat conference champions.

Here’s how the final scores looked on Saturday.

The DAC is Getting More Competitive

One thing is for sure, DAC Swimming has gotten a lot more competitive, and I don’t think that is going to change anytime soon.  Here’s a trend of the DAC Championship Meet scores since 2003.  You can see that for many years, we would regularly double or nearly double the 2nd place team’s score – but not any longer.

I was looking back at 2010.  At the DAC Championship meet, we won every single event except for the Girls Medley relay, which had just won by more than a length of the pool but was DQ’d (I’ll never forget that! ;-)).  That year, we also held every single DAC Short-course yard record except the 50 Free – we had three girls that year who could all go much faster than the record but didn’t get the chance because DAC Champs was held in a meter pool.

But those days are behind us.  With the emergence of Trinity Christian and Fredericksburg Christian, we are going to have to earn every victory for the foreseeable future.

And that’s OK because it is just going to make us better.  We do our best when we are pushed, and we are now being pushed.  If you’ve been watching many of the younger swimmers on our team this year, I think you are going to see that we are up for the challenge!

One unique form of recognition available to our swimmers at this meet was the possibility of being designated “All-Conference”.  All-Conference recognition goes to any swimmer that gets a gold, silver or bronze medal in an individual event.

One thing that you will notice is that we only had a single Gold medal in the entire meet, yet we won the girls handily and almost won the boys.  That’s what happens when so many different swimmers can score, even our younger swimmers.   It is very cool to have two (2) 8th graders on this list!

Here are Seton’s and Wakefield Country Day’s All-Conference Swimmers for 2016-2017:

Shaking Up the State Meet Entries

The State Championship Meet is this Friday and Saturday, February 17-18th.  I have submitted our State Meet entries, and they are now posted.  We are bringing 23 Seton swimmers and one (1) Wakefield Country Day swimmer to the Christiansburg Aquatic Center this year.

I published a draft of our entries prior to DAC Champs knowing that some good swimming this past weekend could changes things – and it definitely did.  I’ve made numerous changes and didn’t do a good job of keeping track of all of them, so if I missed one, please don’t hesitate to let me know:

We had 40 personal records on Saturday which means that exactly 50% of our individual swims resulted in a lifetime best – not a bad way to end the conference season!  And remember as you are looking through these notes that finishes up through 12th place scored points in this meet.

Here are the personal records that I have not already mentioned:

Some Final Notes on States

I’ve posted a document called “Everything You Need to Know About States” in the hopes that it literally tells you that.  I’m continually updating it as plans firm up.

A few things I’d like to highlight from that document: