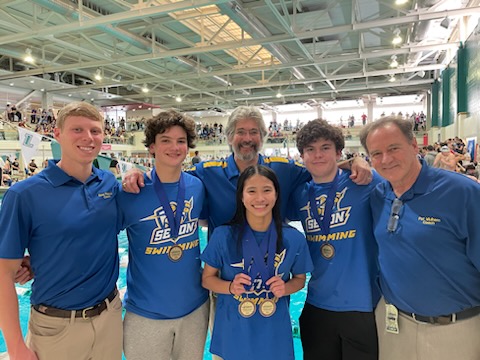 This past weekend was a very busy weekend for Seton Swimming with two (2) separate meets going on nearly 100 miles apart.

Twenty-three (23) members of our team returned to our long tradition of taking our top swimmers to the National Catholic High School Swimming and Diving Championships.  After many years of the Meet being hosted at Villanova, it has more recently been hosted at the beautiful aquatic facility at Loyola University of Maryland, in Baltimore.  As you will see below, despite some painful lessons that had to be learned, our contingent made a very strong showing, especially Coach Ashley Keapproth’s boys diving team and our young phenoms Ariana Aldeguer (8) and Clara Condon (SO).

As remarkable as it was to watch the top swimmers for the top Catholic Schools swim times that might seem otherwise unbelievable if you didn’t see them for yourself, what I saw on Saturday at the Freedom Center was even more remarkable.  The amount of improvement I saw was like nothing I have ever seen in almost 23 years of coaching.

Just for fun, I thought it might be interesting to add up the total amount of time dropped in the 96 Personal Records we saw during the meet.  The total time dropped was 4,481.11 seconds – that is just under 1 hour and 15 minutes!  Are you kidding?  I wouldn’t have believed it had I not seen if for myself.

To accommodate that many swimmers for the 500 Free – an event that could take up to 15 minutes per heat – Bill Dealey, Chris Condon, and the Captains helped pull together our plan to swim two (2) heats at the same time – a so-called “chase start” as Mr. Seltman informed me.  It required us to get 20 separate timers and stopwatches, plus 10 lap counters, behind the blocks to make sure that, with multiple kids in a lane, we could reliably get a time on each one.

As Coach Zadnik, Coach Hurley, and I described the scene on the livestream broadcast, I was glowing with pride watching so many Seton volunteers pitch in to give these kids a chance to learn one of the many life lessons I hope they learn from Seton Swimming:

You can always do more than you think you can.

This past week, the scores were not really a focus for us at all, but here’s how they turned out all the same:

Prior to the meet, I know there were an awful lot of kids who were experiencing great anxiety about swimming in this meet.  (I even know some Mom’s that shared in that anxiety).  Nineteen (19) flip turns?  That’s surely impossible!

I’ll tell you all a little secret though.  I do this sort of thing on purpose – I deliberately put our swimmers in uncomfortable situations so they can build the confidence that only comes from attacking their fears head-on.  Avoiding the fear just legitimizes it, and that is not something I want to perpetuate, particularly when they are afraid of something that is so clearly within their capability.

I suppose I have the advantage of 23-years of watching what happens when you push a kid to swim the 500 Free, even when they are afraid, and this year it all ended as I predicted for so many of those kids:

“Can I swim that again Coach Koehr?  I know I can do it faster.”

I should have counted how many times I heard that question, but it was more than ten (10).  No surprise there.

Well, there was one (1) surprise: Mary Clare Osilka (9), who is not known for her demonstrative behavior, gave me a high-five so hard that my hand is still red!   I was very proud of you Mary Clare!

There were some massive Personal Records in the 500 Free.  Can you imagine a meet where we had 17 PRs of more than one (1) minute and one (1) of more than ten (10) minutes?  Remarkable!

Here are the people who overcame their fear and beat their previous best time by more than a minute:

Here are the other swimmers who swam the 500 Free faster than ever before:

And here are the swimmers who swam the 500 Free for the very first time:

Here are the rest of the 96 Personal Records or first-time swims that I have not mentioned yet:

As I talk about things like deliberately putting kids in uncomfortable situations or teaching kids that they can always do more than think they can do, I am reminded of a pair of Awards Banquet talks that I gave after the ’18-’19 season and the ’19-’20 season:

As I drove back to Baltimore after the meet at the Freedom Center, the key concept in the first one struck me in particular.

Kids are not fragile, nor are they completely durable. Kids are anti-fragile.  This is a concept coined by Nassim Nicholas Talib, a quantitative scientist at NYU who some of you might recognize as the author of “The Black Swan”.

The term “anti-fragile” describes an entity that is strengthened by stress.  A fragile object fractures.  A durable object maintains its integrity.  An anti-fragile object, however, may break down now and again, but properly supported, you can bet it will bounce back from the experience stronger than ever.  Like steel hardened in the forge or clay hardened in the sun, some things get stronger with stress.

That describes, as well as I have ever heard, how our kids get stronger too.  When we as parents constantly shield our children from hardship or adversity or any sort of anxiety, we are actually denying them an opportunity to become stronger.  Yes, it is hard to watch sometimes, but the stress caused by intentionally allowing your child to suffer makes us stronger parents as well.

I strongly encourage you to print these talks and give them a read.  Together, they are pretty much the best description of how I think about raising my own kids and how I’m thinking as I coach all of you on this simple high school swim team.

I want he help parents make much more than “nice” boys and “feminine” girls.  I want those things of course – but I want so much more than that.  I want these boys and girls to grow into strong and capable men and women – strong enough to live their faith in the real world and capable of fully exploiting the gifts that God gave them to make a difference in the lives of others.

During this past weekend (January 14-15, 2023), 23 of our top Seton Swimmers and divers journeyed to Loyola University in Baltimore, MD to compete at the National Catholic High School Swimming and Diving Championship.

I was so pleased with the results, starting with our Boy’s Diving team that competed under the tutelage of Coach Ashley Keapproth.  Believe it or not, no school in the meet scored as many diving points as Seton – in fact, since Diving was the night before swimming, Seton was actually winning the entire meet following the diving competition!  It was definitely cool when they published the meet scores, and we were beating Gonzaga!

The reason we scored so well is because we placed 4 Divers in the Top 16 scoring positions including two who won medals in the Top 8:

Congratulations to these boys and Coach Keapproth.  Let’s repeat that performance at States boys!

On the swimming side, we had two girls qualify out of the Saturday Prelims to swim in the Sunday Finals.

It was a great weekend for both Ariana and Clara as they each prepare to score twice at the VISAA State Championship in mid-February.

We had one (1) relay come back for Sunday Finals too.  Our Girls “A” 400 Free Relay of Ariana Aldeguer (8), Anastasia Garvey (FR), Maggie Gibbons (JR), and Stella Paradise (JR) qualified for the Consolation in 16th place on the strength of Ariana’s lead-off 56.50.  We were pleased with their performance, but Coach Palazzo, Coach Mulhern and I knew they could do better than 3:57.34.

So, at Coach Palazzo’s suggestion, we switched the order to front-load the relay.  It worked great!  After Ariana’s 56.22 lead-off and Stella’s 56.13 2nd leg, we were leading the heat from the outside lane.  Maggie followed with a lifetime best split of 58.26, and that left Anastasia Garvey to try to hold up the anchor against the other seven (7) relays who left their top swimmer in that position.  Anastasia was up the task!  Her anchor split of 1:00.30 was more than two and a half seconds faster than her 100 Free PR, and she was able to touch in 13th place surprising three (3) other schools who entered the race with a higher seed.

Their 3:50.91 was right on Trinity Christian’s 3:50.63 from last week’s meet – without Mary Pennefather (SR).  Watching that race already has me thinking about how to line-up our relays for VCAC Champs.  Their time is also the 7th fastest girls 400 Free Relay swum in the VISAA so far this season.

We had two (2) other relays who would have qualified for Finals but had to learn a hard lesson about the importance of relay starts.  Both our Girls “A” 200 Medley Relay and our Boys “A” 200 Free Relay would have come back Sunday, but they were disqualified for early take-offs.

Their time of 1:53.84 would have finished in the Top 8 in last year’s VISAA State Championship, ahead of all other Division II schools.  Looking on SwimCloud, it also would have been the 6th fastest time swum this season in the entire VISAA, once again ahead of all Division II schools (their time from last week’s VCAC Invitational was also the 6th fastest in the VISAA this season)

And finally, congratulations to our other National Catholic Team members who swam well:

All-in-all, it was a great weekend for our top Seton Swimmers.  We once again stayed in AirBnB houses.  It was so cool being able to have a gathering space between sessions and a central place for all of our meals.

A special thanks to volunteer coaches Pat Mulhern, Ross Palazzo, and Ashley Keapproth, none of whom have kids on the team, for taking their weekend to guide our swimmers and divers.

And also, a big thank you to Mrs. Katie Condon, Mrs. Claire Nguyen, and Mrs. Christi Brox for their hard work organizing and preparing our meals and coordinating rides for everyone.   Mrs. Condon in particular was a super-Swim-Mom for the weekend, and I am so grateful to her for her leadership.

Let’s wrap it up with some final notes:

So, let’s make the most of our training for the rest of January.  It’s nearing the end of the season for most of you, and this is when championships are won for the rest of you!